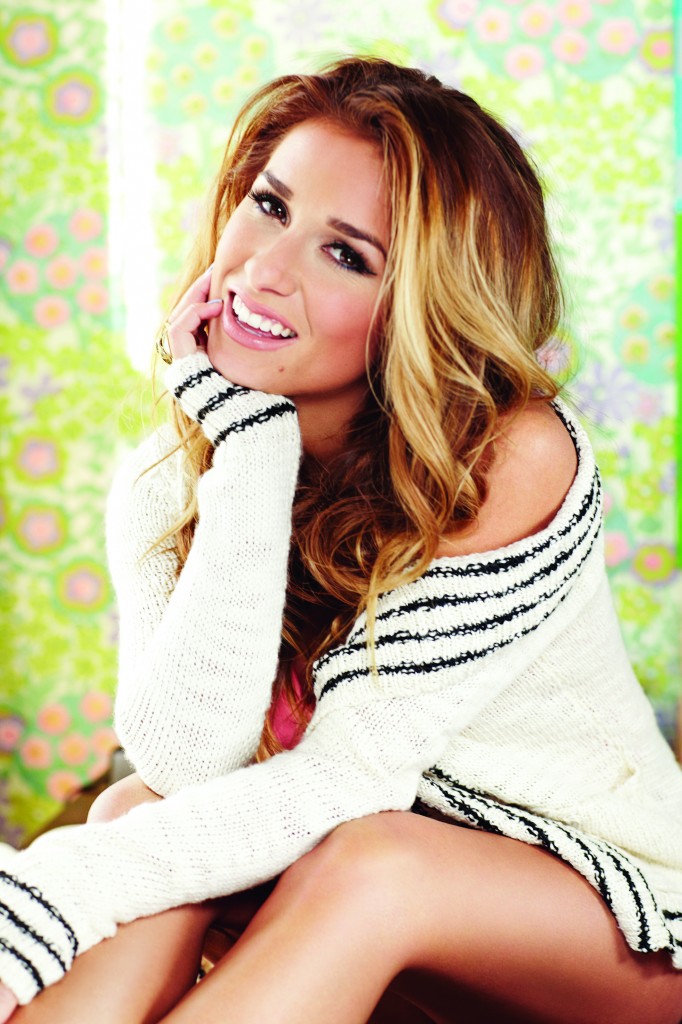 Country newcomer Jessie James is gearing up to make an impact in country music with her hot new single “When You Say My Name”.  Signed with Toby Keith’s label Show Dog Universal, Jessie’s new single is available on iTunes, today, January 31st. Jessie was born in Italy, but she is a southern girl at heart as she was raised in the south.  “I was born in Italy, but only lived their for a year on a military base.” Jessie tells CountryMusicRocks.net.  “I was pretty much raised in the south; Texas, Florida, Louisiana, Kentucky, Georgia. My mom’s from Louisiana, so I definitely had a big cajun influence on me.”

Jessie took the time to chat with CountryMusicRocks.net last week & we got to know the country newcomer and learned that she became involved with music at a very young age.  “Honestly [music] came very natural, it wasn’t pushed on me.  I don’t know how to explain it, it was just something that was in me. I just started singing when I was really young and started performing when I was 9.  I asked for a guitar and just started writing and it was very simple, it just happened.”

Jessie is working on a new album that is anticipated for release this year and she shared with us that Faith Hill was a big inspiration to her.  “I listened to a lot of Faith Hill for this record.  She is just such a golden girl. Her songs are so warm and she has such a good voice.  I was just  obssesed listening to her albums, and all her songs.  Definitely influenced this next record.  And Shelby Lynn as well, her songwriting is just incredible.”

Jessie previously released an album geared more for the pop genre and she indicated that it was easier for her to record this new upcoming country album.  “This [album] was way easier.  I would say it was much harder writing songs for the pop album because I was out of my element. I definitely wasn’t a pop artist or a pop writer and I wasn’t used to writing that way.  I have been going back & forth to Nashville since I was 15 and writing with songwriters there and working with country producers there, so this was much easier.  It felt like home writing for this record.”

“When You Say My Name” is Jessie’s debut country single, released to iTunes today, and she gave us a little insight into her first single. “This is actually one of the few that I did not write for this record.  Mark Wright sent it to me, one of the only songs he sent to me.  He really liked a lot of the ones I had already chosen and written. When I heard it, I just thought it was awesome & it would perfect for me.  It sounded kinda like “This Kiss” by Faith Hill, and a little bit of Shania, so  I just knew it would be perfect for me. We decided to chose this song because it was just fun.  It would be coming out during the spring/summer and it’s just the kind of song you want to roll down the windows of the car and sing along.  And I figured all the girls would like this one.”

When asked if “When You Say My Name” sets the tone for her upcoming album, Jessie said “I would say so”.  “That song is really  fun, kind of song that leans towards girls.  There are songs that are very similar to that, there are ones that you dance to,  there are some that are heartbreaking, there’s honestly such a combination of different styles of songs, different emotions. I think there is something for everybody on this album.”

Jessie will be premiering her video for “When You Say My Name” exclusively on CMT on Friday, February 3rd.  “I had so much fun. I shot with Kristin Barlowe who is just incredible. This was my first time shooting a video with a woman which i really, really liked & preferred. She had such an understanding for what looks good on camera. It was so much fun.  I was just running around the house in my pjs, cleaning and singing, jumping up and down on the couch, it was exactly what I do at home when nobody is looking. It was kinda funny when I read it,  I told Kristin this is exactly what I do everyday.  I clean house in my underwear, and run around and be goofy & sing to a broom. It was perfect.”

James has been lucky to work with some amazing musical talent, including Kara DioGuardi and pop superstar Katy Perry, who have had an influence on her career.  “It was really incredibly working with both of those women because they are so unbelievably talented. Kara can write a song in like 5 minutes, I swear, she is just a machine.  Katy was awesome. I still see her from time to time, she is still the same down to earth, really funny girl. I think if anything they influenced me to just push myself as a writer. The stuff that they still come out with and they still  write and I hear on the radio, they are just incredible women. They inspire me in so many different ways.”

Since Jessie is talented songwriter, we wanted to know if given the opportunity who she would like to team up with to compose & record a song with.  “Probably the lead singer from Nickelback, Chad Kroeger. I think he is awesome.  His voice is so incredible, he is such an amazing writer. He is so country to me, I know many people do not believe that, but he is such a country artist in my opinion with the songs that he writes, his voice, maybe he’s more southern rock.  I do know him and those guys very well, we were managed by the same manager for a while so I got to get to know Chad and he is just such a good guy. So it would be a lot of fun.  I sang karaoke with him before so I kinda achieved it, but it would be great to write one with him.”

We always like to have some fun & include our 5 Quick Questions with artists we interview.  Jessie answered our 5 questions with the first thing that came to mind.

5) When you think of Country Music, the first thing that comes to mind is….? Daisies

With the Super Bowl coming up next weekend, we had to ask Jessie who she was rooting for since she has a “love” for football.  Jessie is dating Eric Decker, wide receiver for the Denver Broncos, so she played it safe with her answer.  “None of them. I root for the Broncos, I have to! But I will say that I do predict that the Patriots will win. I have said that when they did beat the Broncos, I’m like they are going to win the Super Bowl, watch. And they have definitely proven me right so far.”

Be sure to pick up Jessie’s new single “When You Say My Name” available on iTunes by clicking HERE.  Keep up to date with the country newcomer by visiting her official website www.ThisIsJessieJames.com, Liking her on Facebook and Following her on Twitter.

One reply on “Getting To Know Country Newcomer Jessie James”