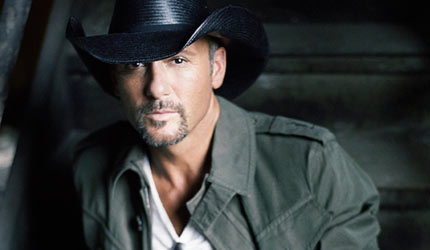 As reported earlier this week, after a long battle with his record label Tim McGraw has ended his relationship with Curb Records.  With this dissolution, Curb will finally release McGraw’s new album Emotional Traffic which is scheduled for release on January 17, 2012.  Shortly after the court hearing on Wednesday, November 30, Curb released Tim’s new single “Better Than I Used To Be” to country radio.

Today, Tim shared a message to his fans on his official website: I fought very hard for the release of Emotional Traffic, it’s an album full of music of which I am very proud.  It’s extremely unfortunate that it wasn’t released earlier this year in conjunction with the Emotional Traffic tour but all I want to do now is focus on the positive and look into the future.  I’m really excited about the new music I’m recording.  Next week I’m putting out a holiday song I’ve just recorded called “Christmas All Over The World.”  After the first of the year,  I’ll have a brand new single which I can hardly wait to share with everyone.  I am so appreciative of the support I’ve received over the years, and I’m looking forward to this next chapter of my career.  -Tim

Keep up to date with Tim McGraw by visiting his official website, www.McGrawFan.com.