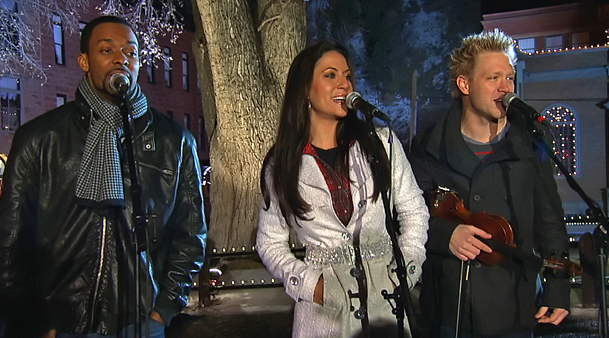 Nashville based trio, THE FARM, will perform in Music City at the New Year’s Eve “Bash on Broadway” December 31st at 9:30 PM, opening for Lynyrd Skynyrd. The event is hosted by GAC’s Storme Warren and will be simulcast on SiriusXM.  Click HERE for more info!

THE FARM is also featured in the GAC special “Christmas in the Black Hills” singing “O Holy Night.” The special hosted by Big & Rich premiered earlier this month and airs through the week on Great American Country (GAC). List of airdates below.

The band – which consists of members Nick Hoffman (vocals, fiddle), Damien Horne (vocals, keyboard, guitar) and Krista Marie (vocals, guitar) – kicked off the holiday season performing their debut single “Home Sweet Home” in the Philadelphia Thanksgiving Day Parade, which fans can watch here. The track has racked up over 60 radio adds across the country, gaining each week on the Mediabase and Billboard charts.

THE FARM is a trio deeply rooted in Country Music with their core built around a solid, identifiable vocal harmony. Originating after an impromptu songwriting session, this electrifying hybrid act displays an undeniable sweet, musical charm. Farmer Nick Hoffman co-produced the band’s forthcoming debut album which will be released next year.