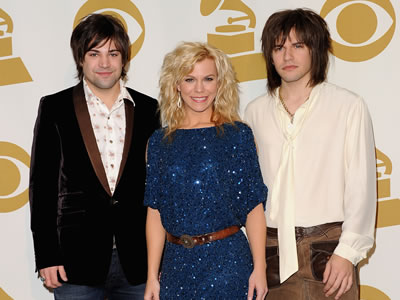 After breaking through this year as one of Country’s hottest new acts, The Band Perry is now celebrating a Grammy nomination for Best New Artist and a newly certified Platinum album! This week the family band performed during “The Grammy Nominations Concert Live!,” earned a nomination for Best New Artist and learned that their debut album, THE BAND PERRY has been certified Platinum by the RIAA.

“We are excited and honored beyond belief. A Grammy nomination is like a gold star from thepeople you most look up to. As we begin our next album, this is a great vote of confidence. To both the music fans who bought our album (and told a friend!) and to the creative community that has welcomed us in; we promise not to let you down,” said Kimberly, Neil and Reid Perry.

These Grammy Best New Artist contenders are already the reigning ACM Best New Artist (April 2011) and CMA New Artist of the Year (November 2011) and their televised performance last night during the Grammy nomination special demonstrated why TBP fans range from the young to the old and come from all walks of life. TBP’s mash-up of their own “Independence” with Tom Petty’s “Free Falling,” stitched together two iconic American themes – coming of age and the celebration of freedom – to showcase their rare knack for combining youthful exuberance with the wisdom of old souls.

“In this environment, it takes something amazing to break through and The Band Perry has done just that with some extraordinary feats, like their Grammy nomination and selling OVER ONE MILLION ALBUMS! There has always been something uniquely special about their music and them as individuals. On behalf of Republic Nashville, we couldn’t be prouder of Kimberly, Reid and Neil, who accolade after accolade, continue to be dedicated and humble,” said Jimmy Harnen, Republic Nashville President.

Currently, the family band is planning their pursuits for 2012. They will continue performing their own headlining dates – many of which broke attendance records at various venues this past summer. They will join Brad Paisley‘s Camobunga! 2012 World Tour in January and continue writing and recording their second album.

Their debut album, THE BAND PERRY, features the #1, triple-Platinum smash “If I Die Young;” Gold-certified single “You Lie,” their current ballad “All Your Life” and the recently performed “Independence.”