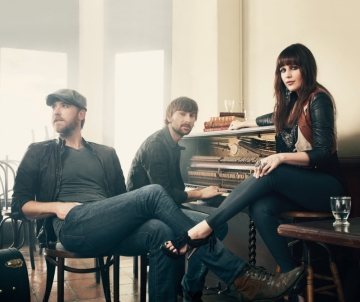 Reigning CMA and ACM Vocal Group of the Year Lady Antebellum will release the wistful “Dancin’ Away With My Heart” from their GRAMMY nominated album OWN THE NIGHT. The nostalgic track is available to country radio for airplay today.

“This song is definitely about looking back on a really special night that you shared with someone, but I also think there’s a timelessness about it,” explains Hillary Scott. “No matter how long it’s been or what the other person is doing now, you will always imagine them to be ’18 and beautiful and dancin’ away with my heart’…that mental picture never changes because that night was magical. I love how romantic that is!”

The track reunites Dave Haywood, Charles Kelley and Hillary Scott with writer Josh Kear, who the trio wrote 2011’s GRAMMY Song of the Year “Need You Now” with previously.

The trio will perform their No. one hit “We Owned the Night” this Wed. on Good Morning America (7:00A CT on ABC) before heading to Live! with Kelly on Thurs. for a performance of “Dancin’ Away with My Heart” (check local listings). Both tracks are off the Platinum certified OWN THE NIGHT, which returned to the top spot on Billboard’s Country Albums chart last week 12 weeks after release, has already scored two No. one hits at country radio and nabbed a GRAMMY nomination for Best Country Album for the 54th Annual GRAMMY Awards in Feb. The trio will also be honored as one of CMT’s five Artists of the Year tomorrow at 8:00P CT.

Lady A will round out the week with the last weekend of the Fall leg of their headlining tour, which has been extended into next year as the OWN THE NIGHT 2012 WORLD TOUR with Darius Rucker and special guest Thompson Square. For a full list of upcoming tour dates and appearances, visit www.ladyantebellum.com.