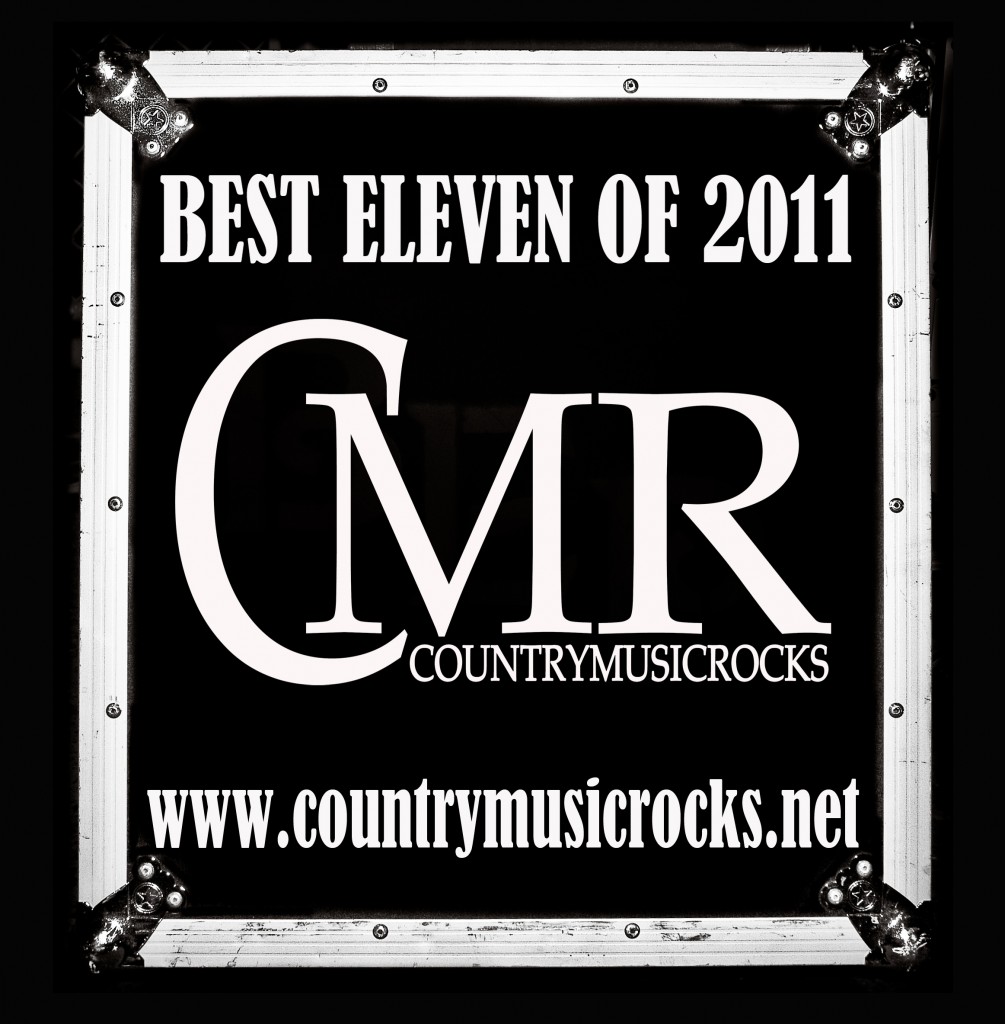 2011 has been an amazing year in Country Music and it is hard to believe it is about to come to a close. We are already anticipating 2012 to be another amazing year and can’t wait to see all that will unfold. Thinking back over this past year, CMR has compiled a “BEST ELEVEN” OF 2011 List. See if some of your favorites topped our list!

1. Are You Gonna Kiss Me Or Not – Thompson Square
The husband & wife duo made a huge debut in country music this year with this infectious hit single which subsequently went on to be #1

2. Barefoot Blue Jean Night – Jake Owen
Jake’s hit single was a perfect anthem for the summer and is sure to be a summer tune continually played on country radio for years to come.

3. Country Girl (Shake It For Me) – Luke Bryan
If anyone shook it this year, it was definitely Luke Bryan! While Luke has had several catchy songs in the past, this one definitely put him on a whole new level as he had fans (and himself) shaking it all summer long.

4. Country Must Be Country Wide – Brantley Gilbert
This song has been rockin’ country radio all across the country, proving that country music IS country wide! In every state there was a station playing Brantley this year!

5. Crazy Girl – Eli Young Band
This song put Eli Young Band on the country map, right where they belong! Fans embraced this song as it was certified Platinum, and then shortly followed with a #1 status on the charts.

6. Dirt Road Anthem – Jason Aldean
Loved that Aldean took a chance & launched this song as a single. The song is country through & through with the “country rap” that stayed true to the country music roots we all know & love, just with a modern day appeal.

7. Home – Dierks Bentley
Impressive album-titled track off Bentley’s forthcoming album. The song truly resonates with listeners as we all are proud of our “Home”.

8. Honey Bee – Blake Shelton
Shelton had fans buzzing as soon as he released this song as his debut single from his eighth studio album, Red River Blue. The song is an excellent showcase of Shelton’s personality. Wonder if Blake included any of these lines in his wedding vows to Miranda Lambert?!

9. Made In America – Toby Keith
It doesn’t matter how many patriotic songs Toby Keith releases, every one of them stand out and truly makes an impact on listeners. “Made In America” is no different as Toby once again makes a striking statement in this song.

11. You And Tequila – Kenny Chesney & Grace Potter
Chesney & Potter’s duet certainly impacted the country music world and the single has garnered two GRAMMY nominations.  Their musical chemistry is undeniable and will be more than evident this summer as Grace Potter joins Chesney’s “Brothers of the Sun” Tour.

2. Sara Evans – Stronger (released 3/8/11)
While it has been six years since her last release of a studio album, Sara did not miss a beat and picked up right where she left off giving fans a fulfilling album filled with fantastic vocals and inspiring songs.

5. Chris Young – Neon (released 7/12/11)
NEON showcases Chris Young’s rich & unmistakable voice that has become a favorite in country music as he is consistently making an impact. Chris told CountryMusicRocks that this was the hardest album he has had to sing and that he pushed himself both as a singer & as a songwriter.

6. Eric Church – Chief (released 7/26/11)
When it comes to country music that rocks, Eric Church without a doubt defines that concept. CHIEF is an album of quality where Church takes his talents to a whole new level.  Church’s unmistakable voice, as well as his delivery, is a testament to the music he is creating.

7. Luke Bryan – Tailgates and Tanlines (released 8/9/11)
Luke Bryan has made a significant impression this past year in country music. His third studio album immediately skyrocketed to the top of Billboard’s Country Chart upon its release and houses his best-selling single to date “Country Girl (Shake It For Me)”.

8. Pistol Annies – Hell On Heels (released 8/23/11)
Pistol Annies is comprised of Miranda Lambert, Ashley Monroe & Angaleena Presley. Their classic country musical arrangements take you back in time to some good ol’ country music while still keeping with the modern day appeal. Miranda, Ashley & Angaleena come in with a bang for a debut album.

9. Jake Owen – Barefoot Blue Jean Night (released 8/29/11)
Owen’s third studio album showcases the growth of Jake as an artist. His rich, unmistakeable voice is flawless as well as his solid delivery on all 11 tracks.

10. Miranda Lambert – Four The Record (released 11/1/11)
Lambert’s 4th studio album sets itself apart from her first three albums, as Miranda takes it a step further and puts it all out there. Lambert reflects soul, passion & of course some attitude throughout the album and brings it all together so that it flows seamlessly. This album is a work of art and Miranda Lambert serves as the talented artist behind the masterpiece.

11. David Nail – The Sound of A Million Dreams (released 11/15/11)
David “nailed” it with this album. Upon one listen, listeners will be captivated.  Subsequent singles that are set to follow up his impressive single “Let It Rain” are sure to make an impressive impact.

4 replies on “CountryMusicRocks “Best Eleven” Of 2011”