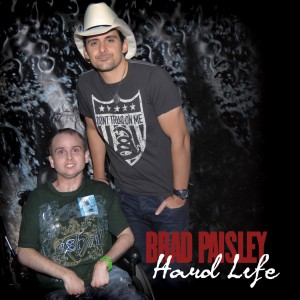 Brad Paisley has just recorded a new song, “Hard Life,” available for purchase HERE and on all digital music outlets.  The song is written by Paisley’s friend, 23-year-old Joe Kindregan from Springfield, VA, who has A-T (ataxia-telangiectasia), a rare, fatal genetic disease that combines symptoms of cystic fibrosis, muscular dystrophy, immune deficiencies and cancer. The release of the new song marks a special initiative on behalf of the non-profit A-T Children’s Project, the yearlong beneficiary of Brad’s artist royalties from U.S. digital single sales of “Hard Life.”

“I’ve known Joe for several years and he is one of my favorite people.  His disease is physically debilitating but obviously creatively and mentally Joe has such tremendous depth.  It’s an honor for me to be the person to give voice to his creativity and cause,” says Brad.

Brad and Joe met in 2005 at a fundraising event hosted by former professional hockey star Shjon Podein, for Team 25, benefitting children facing extraordinary difficulties.  It was at this event that Joe was convinced by his buddy, Brian Christiansen, who also had A-T, to join him on stage and sing with Brad. Joe developed a love of country music and its true-to-life lyrics. Over the years he and Brad have stayed in contact and Joe has attended many of Brad’s concerts. When Joe’s friend Brian lost his battle with A-T a few years ago he knew he wanted to do something to carry on their love of music, and with encouragement from Brad, decided the best way to do that was to put his story in a song.

Joe knew he wanted to write about enduring life with A-T, the good and the bad.  He talked to other people who also had the disease and then put his thoughts on paper to share with Brad.  Once Brad saw the lyrics he knew they had something important. Joe came to Brad’s Nashville studio twice to be a part of laying down the tracks and to see his song being produced firsthand.

Joe thinks that his pal Brian would have been proud and excited to know that he had written a country music song about their struggles and it was produced and sung by Brad.