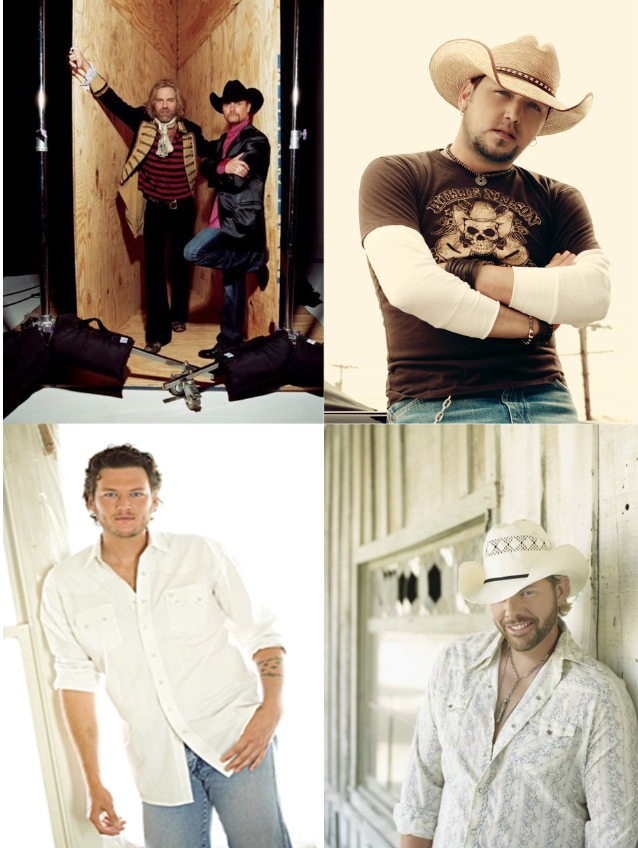 When Country Thunder rolls around on July 19-22, 2012, it will mark the 20th anniversary of the premiere camping, music and entertainment festival, and now … the long anticipated line-up announcement has arrived!

Headlining Thursday night is multi-platinum duo Big & Rich who’s raucous-raising performance will be the perfect way to kick off the 4-day festival extravaganza. Comprised of Kenny Alphin and The Celebrity Apprentice winner John Rich, the duo has garnered multiple GRAMMY, ACM, CMA and CMT Music Award nominations. Their hits include their infectious smash-hit singles, “Fake ID,” “Save a Horse (Ride a Cowboy)” as well as “Comin’ to Your City,” “8th of November” and “Lost in this Moment.” Joining Big & Rich on Thursday, is hot new All In/Elektra Nashville/ New Revolution country act, THE FARM, whose debut single “Home Sweet Home” is currently building at radio.

Georgia native Jason Aldean will headline Friday night, with Steve Holy and Wade Bowen in the opening slots. Aldean recently earned two CMA Awards, six ACA Awards and three nominations for the upcoming GRAMMYs, and was chosen as a CMT Artists of the Year honoree for the second consecutive year.  Also joining Friday’s line-up is Aldean’s tourmate Luke Bryan, who has performed numerous hits including “All My Friends Say,” “Country Man,” “Do I,” and the chart-topping singles “Rain is a Good Thing,” and “Someone Else Calling You Baby.”

Blake Shelton, reigning CMA Male Vocalist of the Year for the second consecutive year, will perform at the festival in Wisconsin on Saturday. Shelton continues to be the “most versatile of contemporary country singers” (The New York Times”) and recently received three GRAMMY nominations for “Best Country Solo Performance” for “Honey Bee,” “Best Country Song” for “God Gave Me You” (written by Dave Barnes) and “Best Country Album” for Red River Blue. This is Shelton’s first award nomination for “God Gave Me You,” a three-week No. 1 and his fastest rising single to date, and his second award nomination for “Honey Bee.” “Honey Bee” is his first ever digital Platinum single and holds the record for the fastest-selling digital Platinum single for a male country solo artist. The single held the No. 1 spot on the Billboard Country chart for four weeks in a row with over 40 million in audience. No country artist has held this record in almost six years. Both nominated songs, “God Gave Me You” and “Honey Bee” are off his current release and GRAMMY nominated album, Red River Blue.

For the final day of the event, the one and only Toby Keith will take over the stage making sure the 20th annual Wisconsin Country Thunder Festival is a party until the very end. From his first single and No. 1 smash “Should’ve Been A Cowboy” to his latest album and Billboard Top Country Album chart-topper Clancy’s Tavern, Toby Keith has been one of the most consistent self-directed hit makers of his era. He’s now in his 18th consecutive year having had a #1 single every year since his first release.  Toby’s new single, “Red Solo Cup,” has become the most remarkable and commercially successful new country single in recent memory,  with a viral video earning millions of views online, and the song becoming one of the most downloaded country songs. In the history of recorded music, artists exhibiting that kind of consistency and longevity are in an exclusive club. Keith, however, may be in a class by himself.  Joining Keith on Sunday’s line-up will be returning Country Thunder favorite and two-time Entertainer of the Year, Neal McCoy, Atlantic Nashville’s Hunter Hayes, and Brantley Gilbert, who has recently earned his first No. 1 song in the country with the aptly titled single “Country Must Be Country Wide”.

Taking place July 19-22, 2012, country fans from across the nation will travel to Twin Lakes, WI for four full days of non-stop entertainment.  For only $99 (price good until January 1,2012) you can purchase a 4-day pass gaining access to the entire weekend of music and entertainment! For the total festival experience, a campsite may be purchased, with prices beginning as low as $100 for the entire weekend. Country Thunder offers five different camping options, from the primitive General campgrounds to the Big Rig campsites which come with amenities including hook-ups for water and electricity.

Tickets, camping, and amenity add-ons can all be purchased online at www.countrythunder.com or by phone at (866) 802-6418. Additional artists will be announced soon, so for all things Country Thunder please visit  www.countrythunder.com  or  www.facebook.com/countrythunderusa to stay up-to-date on one of the nation’s premier outdoor camping, music, and entertainment festivals!