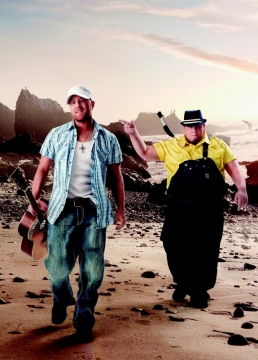 While group member Big Vinny moves ahead to week seven on NBC’s “The Biggest Loser,” Trailer Choir has released a brand new single and its first as a duo. The Hollaville Records title, “Love Me First,” is now available on itunes and other digital music sites. According to group member Butter, the song’s lyrics reflect all he and Vinny have gone through the past year.

“We lost our record deal, went from a trio to a duo and had to face the fact that Vinny’s health might prevent him from ever entertaining again,” Butter explained. “It was a scary time. Vinny was down, and not just emotionally. He was flat in a hospital bed for almost two weeks.”

Diagnosed with Type 2 Diabetes, Vinny knew he had to make a serious lifestyle change. “I always thought I was comfortable with my weight, I was just the big guy in the overalls,” he said. “But after I got sick, I started to really look at myself from the inside out and I realized that maybe I wasn’t as happy or healthy as I could or should be.”

The artist/writer decided to audition for “The Biggest Loser,” and was selected as a contestant. He has thus far made it through six weeks of competition and is entering his seventh week on the show, which airs Tuesdays at 8/7 central on NBC. He has gone from weighing 426 to weighing 367 pounds, losing 59 pounds during the show’s first six weeks. Two new trainers – Anna Kournikova and Dolvett Quince — joined “ Biggest Loser” favorite Bob Harper and 15 new contestants for this season’s “Battle of the Ages,” which for the first time grouped contestants according to age.

According to Butter, while “Love Me First” is inspired by Vinny’s health scare, and the decision he made to change his life, “the lyrics to the song also reflect a common theme we all face—the daily struggle to find and fight for love and happiness, and the realization that we meet that only when we love ourselves first,” he said.

For more information on Trailer Choir, please visit www.trailerchoir.com or facebook.com/trailerchoir. To learn more about “The Biggest Loser,” visit www.nbc.com/the-biggest-loser/.