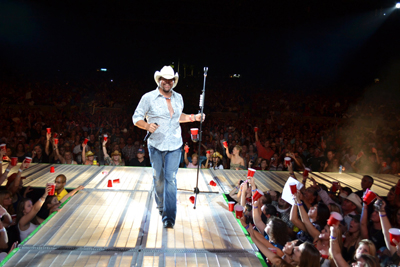 Toby Keith’s “Red Solo Cup” continues to overflow just a few weeks after the video debuted on the internet. Perhaps the most explosive song of Keith’s career, and certainly the most successful album track, “Red Solo Cup” is stacking up accolades and roaring past milestones faster than they can be counted. The latest:

• Online views of the party-themed video are more than 3 million.
• The song has been the No. 1 country download for two consecutive weeks.
• FOX’s hit show Glee will feature the song in early December.
• The song is being used as a music bed in teasers for the new Tim Allen sitcom Last Man Standing.
• Despite not being a single, the track has been one of the most added at country radio, with 50% of the reporting panel playing it.
• Significant rotations in major markets including Detroit, Kansas City, Denver, Tampa and on Sirius XM, among many others.
• It is the No. 1 requested video on CMT.
• The Boston Herald hailed the “hilarious ode to the brew-holding ‘Red Solo Cup’.”
• NPR referenced it as “Every party’s most popular guest.”

Respected and influential radio consultant Rusty Walker recently told trade publication Country Aircheck, “Aside from Taylor Swift’s career, which was a different manifestation, this is the first viral thing that has come back to hit country square in the forehead.” And the song seems to have hit a lot of people in the sweet spot.

Fans at Keith’s Locked & Loaded Tour shows have recently refused to stop singing the song after Toby finishes his performance of it. In fact, Keith has had to perform the song TWICE at several shows to satisfy the crowds. The standing-room only audiences have recently helped Keith’s tour top Billboard’s weekly list of Hot Tours with over $14.5 million in box office grosses reported from 24 venues, including totals from the final two months of the North American leg as well as the beginning of the European trek that kicked off on Oct. 30.

Still not officially a single, “Red Solo Cup” has helped fuel sales of Keith’s latest album Clancy’s Tavern, which debuted at No. 1 on the Billboard Country Albums chart. The Boston Herald called the collection a “terrific mainstream country effort” and notes that “album after album, Toby never lets his fans down.”

If you haven’t seen the “Red Solo Cup” video yet, watch HERE.