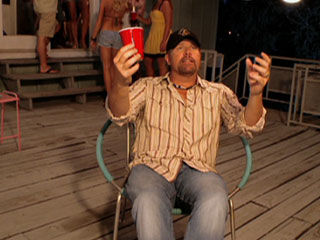 While the collection’s first single “Made In America” shot to No. 1, it’s successor has an unparalleled head start. Already the No. 1 downloaded country song, the video has surpassed 4 million web views and is the No. 1 request on CMT. As it becomes an official single, “Red Solo Cup” is already receiving airplay on three-fourths of reporting country stations.

The “Cup” is sweeping through popular culture in other ways, too. The hit FOX television show Glee will feature the song in its Dec. 6 episode. “Red Solo Cup” has been used as a music bed in spots for the new Tim Allen sitcom Last Man Standing. Major media hailing the tune have included the Boston Herald, Village Voice, Entertainment Weekly, Slate, AOL and NPR.

The song is so popular, crowds have continued singing it long after Keith finishes his performance of the song during is Locked & Loaded tour stops. In fact, Toby has even played the song twice at shows in an attempt to satiate his fans’ hunger for the tune.

If for some reason you haven’t yet seen the video for “Red Solo Cup”, click HERE & Enjoy!!