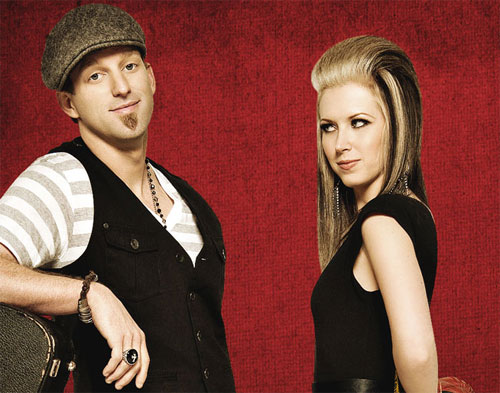 It’s a big night for the rising stars.  The husband/ wife duo – comprised of Keifer and Shawna Thompson – are nominated for both Vocal Duo of the Year and the New Artist of the Year at the 2011 CMA Awards and will perform live on the CMA Awards broadcast, also on ABC.

This past Sunday, Thompson Square was featured as the lead item in USA Weekend’s “Who’s News” column under the headline “Who’s Hot In Hollywood.” Coincidentally, the duo had opened for Jason Aldean on his My Kind of Party Tour at the Gibson Amphitheatre in LA only the night before the item published.

Today, Thompson Square is profiled in the Associated Press in a feature chronicling the duo’s 15-year overnight success story.

Thompson Square’s new single, “I Got You,” the carefree, up-tempo crowd favorite, climbed into the Top 10 on the Billboard Country Songs chart and rose to #9 on the Mediabase Country chart this week.  Earlier this week, it was announced that Thompson Square would also perform live on FOX’s 2nd Annual American Country Awards, on Dec. 6th. The duo is nominated for 7 awards that evening and is the 2nd highest nominated act, bested only by multi-platinum superstars Jason Aldean and Zac Brown Band.

One of Country music’s biggest breakout acts of 2011, Thompson Square’s infectious #1 radio single, “Are You Gonna Kiss Me Or Not,” is the Most Played Song at Country Radio this year (Mediabase).  The single spent 5 consecutive weeks at #1 on the Country Digital Soundscan Chart and has sold 1.5 million downloads to-date.  The single also reached #1 on the Billboard Heat Seekers Chart and was the #1 Country Ringtone for 12 weeks straight.  Additionally, the 2011 American Music Award nominee for New Artist of the Year is also the only duo to reach #1 on CMT’s Top 50 Artist Chart in 2011.

Since releasing their debut album in February, Thompson Square has performed on The Tonight Show with Jay Leno, Conan, Fox & Friends and Fox’s Summer Concert Series, as well as been featured in USA Weekend, Entertainment Weekly, People Country, Country Weekly, USA Today, The Washington Post and Billboard. The duo’s follow-up single, “I Got You,” is a Top 10 hit.  Thompson Square wrapped up a year of touring with multi-platinum country rocker Jason Aldean on his My Kinda Party 2011 Arena Tour last week in California.  The duo heads out on the road with Darius Rucker this Friday in Saginaw, MI.  Thompson Square will join Lady Antebellum on the road for their Own The Night World Tour 2012 on January 27 in Tulsa, OK.