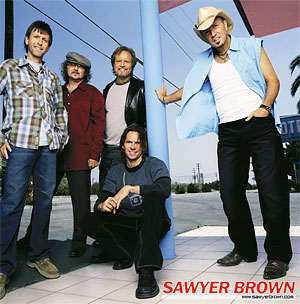 “I always want to be a good steward of the many blessings God has given me,” explains Mark Miller, lead singer for Sawyer Brown.  “Being involved with Compassion International will give me the opportunity to give back.”

Sawyer Brown first rose to fame in 1983, after winning the national TV talent competition, Star Search.  The group has since recorded 20 studio albums and charted more than 50 songs, including the number one hits, “Step that Step”, “Some Girls Do”, and “Thank God for You”.

The group has also won an assortment of awards including 1985’s Horizon Award from the Country Music Association, 1997’s Vocal Group of the Year from the Academy of Country Music, and five Vocal Band of the Year trophies from the TNN/Music City News Country Awards.

“They guys of Sawyer Brown are known for their big hearts, throughout the country music industry and around the world,” says Zane King, Artist Relations Regional Director for Compassion International.  “What a privilege to have them as part of our Compassion team.”

“Sawyer Brown has always been known for its ability to energize an audience,” says Todd Stewart, also of Compassion International.  “If anybody can motivate people to help eradicate world poverty, Sawyer Brown can.”