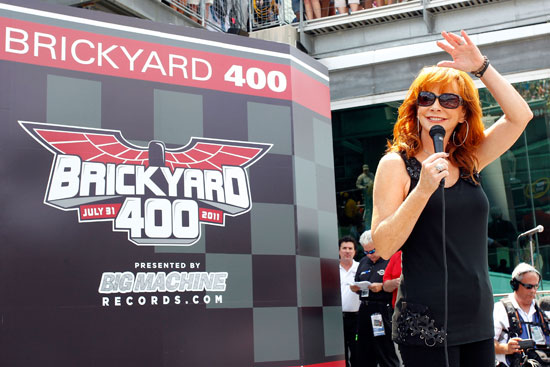 The ceremony honors the 2011 NASCAR Sprint Cup champion and other drivers who finished in the top 10 of the final series standings.  Increasingly, it has become a full-fledged entertainment experience with appearances by major celebrities.

Reba indeed qualifies as “major.”  Her Facebook page has nearly 2.5 million “likes” and here’s why:

In addition to her host duties, Reba will perform the song “Turn on the Radio” from her recently released album “All the Women I Am,” on The Valory Music Co. Other special segments involving Reba also are planned for the season-ending celebration that will be broadcast by SPEED, SiriusXM NASCAR Radio and MRN Radio (9 p.m. ET) from the Wynn’s LaFite Ballroom.

“Since we moved the awards ceremony to Las Vegas, we’ve really increased our focus on the entertainment value for those in attendance and our fans watching and listening at home,” said NASCAR Chairman and CEO Brian France. “Having Reba at our show reflects that; she is unbelievably popular, with wide-reaching mainstream appeal. And of course, we also like the fact that she’s a fan of auto racing.”

Reba’s son Shelby Blackstock competes in GRAND-AM Road Racing competition and she attended several of his events this year. She also performed “America the Beautiful” and “God Bless America” prior to this year’s NASCAR Sprint Cup race at Indianapolis Motor Speedway, the Brickyard 400 Presented By BigMachineRecords.com.

“I’m delighted to be hosting the NASCAR Sprint Cup Series Awards this year,” Reba said. “Country Music and NASCAR have shared fans for many years so I’ll feel right at home. My family and I have gotten to meet so many nice people in the racing industry this year with my youngest son, Shelby, being one of the competitors. We appreciate so much the super hospitality.”

Other entertainment-related announcements regarding the awards ceremony are expected in the near future.