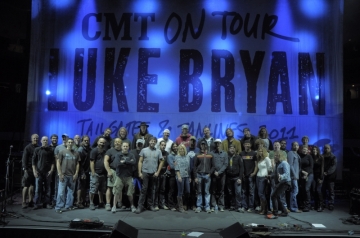 Luke Bryan wrapped his first major headlining tour over the weekend – “CMT ON TOUR: Luke Bryan Tailgates & Tanlines” – performing in 22 cities with opening acts Lee Brice, Josh Thompson and CMT’s New Superstar winner Matt Mason.  The 2011 tour has become one of the most successful to date.

“This year, we witnessed one of the most successful tours in the now 10-year history of CMT ON TOUR, with Luke playing to packed houses every night,” said Leslie Fram, senior vice president of music strategy, CMT.  “He is an undeniable talent and over-delivered on his promise to entertain, evident by watching the crowd dance and sing along to every song.”

To get a glimpse of behind the scenes action on the tour as well as Luke performing his current smash hit single “I Don’t Want This Night To End” from his Capitol Records Nashville album tailgates& tanlines, watch here.

Luke’s confident and lively performances were heralded by concert promoters alike throughout its run.

Todd Boltin of Variety Attractions said, “(With) each show I’ve watched, Luke’s confidence seems to grow stronger and stronger.  He is connecting with the crowd the way Garth used to in the early 90’s.  I watched the crowd break a sweat singing and dancing along with him.”

“America, meet Country’s next Superstar… his name is Luke Bryan!,” exclaimed Don Kronberg of NitelLite.  “He delivered a live show that looked like it took years to create…he’s ready to shoot right to the top.”

Connie Hunt of The Arena in Corbin, Kentucky shared, “I have to say with 20 years in this business I was blown away by Luke Bryan!!  It caught me off guard; his live show is just incredible!!   He did not stop the energy level from the time he hit the stage and he had the crowd in the palm of his hand and kept them on their feet!  The screaming reminded me of old Beatles performance footage.   He is the talk of the town as he has wowed everyone including me.  I don’t write many quotes, if ever, about watching an artist perform but to borrow a line from Mark Knopfler (song) ‘this young man’s future’s so bright he’s definitely gonna have to wear shades.’”

During a two-week break of the CMT ON TOUR, Luke took his “Farm Tour” to six cities and played for over 42,000 fans, raising funds for local college scholarships in each of the cities he performed.

2011 was the tenth-annual CMT ON TOUR which launched in 2002 and has featured superstars Trace Adkins, Jason Aldean, Randy Houser, Jamey Johnson, Miranda Lambert, Brad Paisley, Rascal Flatts, Sugarland and Keith Urban.  The 2011 CMT ON TOUR was produced by Lindsay Bertelli of Reach, LLC.

Keep up to date with Luke by visiting his official website, www.LukeBryan.com.