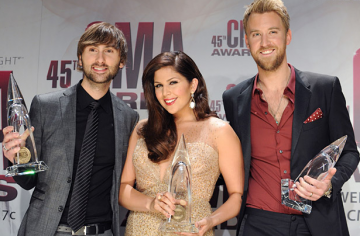 After a record breaking debut, GRAMMY winning trio Lady Antebellum’s third disc OWN THE NIGHT has been certified PLATINUM by the RIAA for sales of one million units just four weeks after its release. The group has now sold a career total of seven million albums worldwide and Wed. night claimed its third consecutive CMA “Vocal Group of the Year” trophy.

“It’s been a dizzying and exciting few months launching this album, but it’s also really energizing to see how the fans are reacting to some of the songs on our new record,” says Dave Haywood.  “The reaction both in the States and overseas has been a huge confidence booster as we are getting ready to launch our first big arena tour this Friday.  We couldn’t be more excited to get back out on the road!”

The disc also hit big overseas, debuting in the Top 10 on the album charts in the UK, Japan, New Zealand, Australia, South Africa and Switzerland. Their smash hit in the US “Just A Kiss” already claimed the No. one spot at country radio and pushes into the Top 10 this week on the Hot AC and AC charts.  The track also continues to climb the international radio charts in the UK, Japan, Holland, Belgium, Switzerland, France, Austria, Ireland, Portugal, Sweden, Australia and New Zealand.

OWN THE NIGHT debuted at the No. one position on Billboard’s Top 200 album chart in the states and Canada this Sept., becoming the biggest first week debut by a country artist this year. Its current Top 10 hit “We Owned The Night” follows the album’s chart topping lead single “Just A Kiss.” Lady A is currently nominated for Favorite Country Band, Duo or Group for the 2011 American Music Awards and will be honored as one CMT’s five Artists of the Year in December. They will kick off the first leg of their OWN THE NIGHT 2011 TOUR tonight in Knoxville, TN.