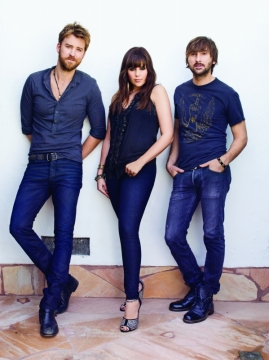 CMA Vocal Group of the Year Lady Antebellum kicked off their headlining arena OWN THE NIGHT 2011 Tour sponsored by GAC this weekend in Knoxville, TN with a sold out concert at the Knoxville Coliseum.

“Lady A has taken their tour to the next level,” said Mike Hammond, Program Director for Knoxville’s WIVK. “Their energy, enthusiasm, stage presence, big screens, the music, the stage, etc. This is definitely on the must see list this fall.”

“Lady A’s live show has gone to a whole new level,” commented Entercom’s Director of Programming Mike Moore. “A new stage, bigger production, HUGE video screens and their typical rock solid performance rocked the house in Knoxville on opening night!  Sure to be one of the must see shows of 2012!”

The trio’s new album OWN THE NIGHT debuted at the No. one position on Billboard’s Top 200 album chart in the states and Canada this Sept., becoming the biggest first week debut by a country artist this year. Its current Top 10 hit “We Owned The Night” follows the album’s chart topping lead single “Just A Kiss.” Lady A is currently nominated for Favorite Country Band, Duo or Group for the 2011 American Music Awards and will be honored as one CMT’s five Artists of the Year in December. The first leg of their OWN THE NIGHT 2011 TOUR will continue this week in El Paso, TX (11/16), Phoenix, AZ (11/17) and Las Vegas, NV (11/18).