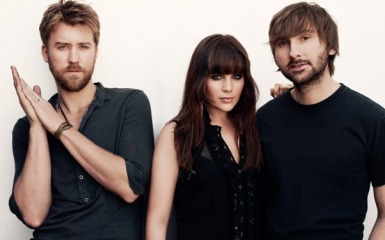 Reigning CMA and ACM Vocal Group of the Year Lady Antebellum’s anthemic “We Owned the Night” takes the top spot on the Billboard Country Singles chart this week, marking the trio’s sixth career No. one hit. The track has already scored big internationally, having spent three weeks at No. one on the Billboard Canada Country chart.

“This is our tour opener, and every night when we start into it, you can definitely feel the support that country radio has given this song.  Everyone is ready for it, and the energy really helps get the night kicked off right and sets the tone,” says Charles Kelley.  “It’s crazy to think we’ve had six No. one hits…we want to send out a big thank you to all of our friends at country radio, our record label and our fans!  We know these don’t come easy…it’s a big group effort!”

“We Owned the Night” is the second No. One single off the group’s Platinum certified new album OWN THE NIGHT, which became country music’s biggest first week debut this year. The trio will be honored as one of CMT’s five Artists of the Year in December.

Fans can catch Lady A on the Fall leg of their headlining tour, which was recently extended into next year as the OWN THE NIGHT 2012 WORLD TOUR with Darius Rucker and special guest Thompson Square. For a full list of upcoming tour dates, visit www.ladyantebellum.com.