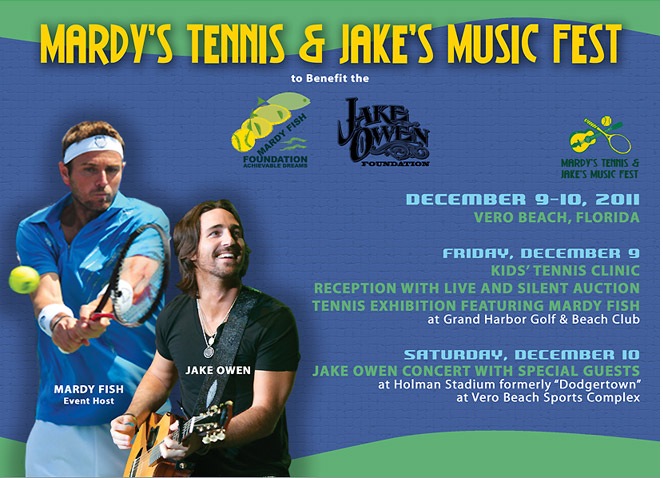 Paslay has established himself as one of Nashville’s most sought after young songwriters, contributing tracks for Lady Antebellum, the Eli Young Band, and Donny and Marie Osmond.  Paslay also co-wrote Jake Owen’s 2011 smash hit “Barefoot Blue Jean Night.”  In February 2011, Paslay signed with EMI Records Nashville to record his debut album, giving him the opportunity to focus on his career as an artist.  His debut single, “Never Really Wanted” reached No. 48 on Billboard’s Hot Country Songs chart.  Paslay has toured with many country music greats, including Dierks Bentley, Clint Black, Eric Church, Blake Shelton and Little Big Town, and is currently on tour with Vero Beach’s own Jake Owen.

“We are very excited to announce the addition of my good friend Eric Paslay to the Mardy’s Tennis & Jake’s Music Fest lineup,” said Owen.  “Eric is one of Nashville’s best songwriters but he’s also a great performer.  I think folks are really going to be blown away by his set.”

2011 has been an exciting year for Jake Owen and Chris Young as well.  Owen released his third studio album, Barefoot Blue Jean Night, in August, and the title track became the first Platinum-certified hit of his career.  Young released his third album, Neon, received a CMA nomination for New Artist of the Year and had the fourth No. 1 single of his career with “Tomorrow.”  Owen’s current single “Alone with You” and Young’s “You” both rank among the Hot Country Songs Top 40.