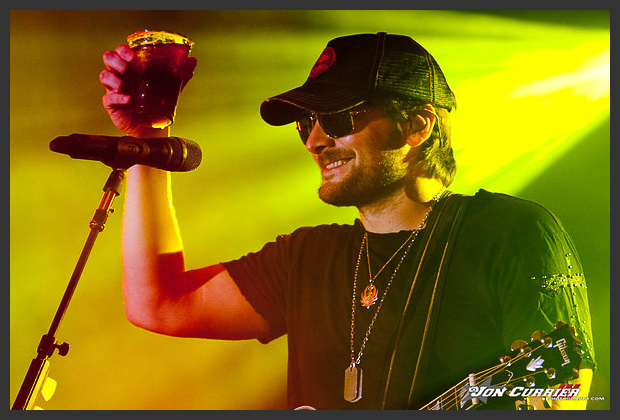 Don’t be surprised if “Parental Discretion Advised” appears on the ticket when Eric Church brings his newly announced The Blood, Sweat & Beers Tour to over 50 cities in 2012. The St. Petersburg Times recalls his last performance in their town noting Church “made the rowdiest yawp, and drew the most toked-up fans.” With word of mouth long fueling Church’s sweat-soaked, sold-out crowds, Church surprised Music Row naysayers earlier this year when his third release, CHIEF, topped the Billboard charts with over 145,000 albums sold in its first week—a true testament to the years of hard work by Church and his band on the road. CHIEF has since been certified Gold and produced the Top 15 “Homeboy” as well as current Top 15 and climbing single, “Drink In My Hand,” on which Church’s live show serves as the backdrop for the music video counterpart.

No other up-and-coming artist is quite as suitable for the raucous Church crowd as Big Machine Label Group’s Brantley Gilbert. Gilbert, who has experienced recent radio success with his current No. 1 hit, “Country Must Be Country Wide,” has been building his fan base on the outskirts of “polished” country for years in the southeast. Similar to Church, Gilbert brings grit and attitude to the stage – and he should fit in just fine with the theme of The Blood, Sweat & Beers Tour.

Church announced the tour earlier today on EricChurch.com to his Church Choir members exclusively, and beginning on January 19, 2012 in Fort Smith, AR, Church will kick off the 50+ dates nationwide with stops stretching from New York, NY to Minneapolis, MN, Chicago, IL and Nashville, TN.

“We have been building our entire career for this tour. It is truly the culmination of a lot of blood, sweat and beer that has brought us to this point in our career,” says Church. “I have always trusted our fans to deliver with their dedication and passion, they have always exceeded my expectations. I have never been more excited to begin a tour than this one. The band and I are committed to emptying the tank every night and delivering the best show we can.”

Ticket prices range from $34.75 for reserved seats to $199 for the aptly titled, “Put a Drink in YOUR Hand” VIP Package. The package will be limited to no more than 200 fans per show and will include premiere seating, a pre-show party with food and drinks, a two-song acoustic performance by Church, as well as autographed memorabilia including a limited edition signed show poster, Eric Church – The Blood, Sweat & Beers Tour t-shirt, and an exclusive tour laminate. The VIP experience will be made available through all ticketing outlets.