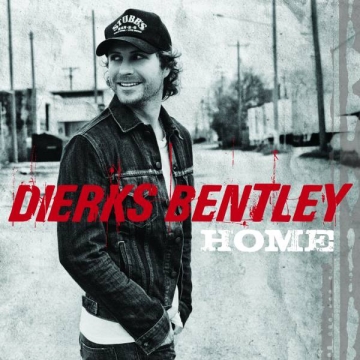 Award winning singer/songwriter Dierks Bentley announced today that his sixth Capitol Nashville studio album HOME will be released on Feb. 7, 2012. The upcoming album’s anthemic title single was released to iTunes last week and immediately shot up the Top 10.  It follows the disc’s “Am I The Only One,” which recently marked Bentley’s eighth career No. one hit.  Bentley will play a special album release show in Nashville at the historic Ryman Auditorium on Feb. 2.  Fans can purchase tickets beginning this Fri., Nov. 18 at 10:00A CT at the Ryman box office, on ryman.com and through all Ticketmaster locations.

“My home is in Nashville with my family, my home is on the road with our fans and my home is definitely in country music,” said Bentley. “This album is more than a year’s worth of writing, recording and testing out material on the road in front of our hard core fans.  The end result is an album that runs through all the types of country songs and sounds I enjoy singing and playing. I can’t wait to share it with the fans!”

Bentley will perform “Home” on Late Night with Jimmy Fallon this Thurs., Nov. 17 at 11:35P CT/12:35P ET. The inspiring track continues to garner the attention of critics across the country, most recently described by AOL as “sure to resonate with Americans facing challenges today.”

“The lyrics paint a picturesque portrait of our country’s beauty and strength, while the melody wraps around the listener like an autumn sunset…Bentley has crafted a song that acknowledges the nation’s struggles, yet resonates with hopeful optimism about the future.” ~Billboard