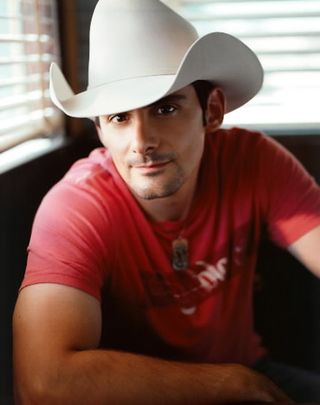 Before country music gave us the likes of Vince Gill, Brad Paisley, and Keith Urban — all hit recording artists and incredible guitarists — there was Glen Campbell. Earlier this year, the 75-year-old Country Music Hall of Fame legend revealed that he’s suffering from Alzheimer’s disease and would be launching his farewell tour, underway now. Brad Paisley had a chance to see Glen perform on the tour, and he’s proud to be part of a musical tribute to Glen at Wednesday night’s 45th Annual CMA Awards.

Listen to Brad Paisley talk about Campbell by clicking HERE.

1968’s CMA Entertainer of the Year and Male Vocalist of the Year, Glen Campbell built a remarkable career spanning 27 Top 10 Billboard country chart hits, with five that went to number-one, including “Southern Nights” and his signature “Rhinestone Cowboy,” blockbusters that topped both the country and pop charts.  He’s sold more than 45 million albums, but if you’re a little to young to remember the music of five-time GRAMMY® winner Glen Campbell, you owe it to yourself to check it out. Some of his hits have become classics, including “Galveston,” “Gentle on My Mind,” “Wichita Lineman,” and “By the Time I Get to Phoenix.”  A multi-format entertainer, Glen not only was an acclaimed session musician, perhaps most notably playing on Frank Sinatra’s “Strangers in the Night” and The Beach Boys‘ Pet Sounds album, he was also an actor who starred alongside John Wayne in True Grit and hosted his own popular CBS variety series, The Glen Campbell Goodtime Hour.  Learn more about Glen Campbell, find out about dates on his Goodbye Tour, and order his recently released final studio album, Ghost on the Canvas, on Glen’s website at GlenCampbellMusic.com.

Be sure to tune-in for The 45th Annual CMA Awards, co-hosted by Carrie Underwood and Brad Paisley, this Wednesday, November 9th, at 8pm, ET, on ABC.