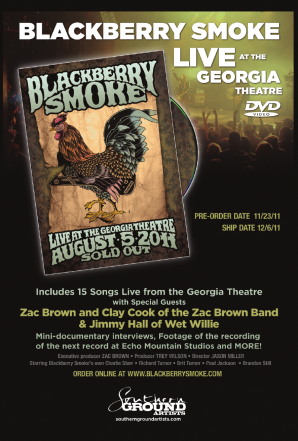 Southern Ground recording artists, Blackberry Smoke will debut the trailer and begin pre-sales for the band’s first ever live DVD, Blackberry Smoke; Live at the Georgia Theatre at www.blackberrysmoke.com Wednesday, November 23, 2011. The critically acclaimed southern rockers filmed the live concert in front of a sold out at the Georgia Theatre in Athens, GA. In addition to releasing a new DVD, the band was recently announced as special guests on the newly announced 2012 “Eric Chuch-The Blood, Sweat & Beers Tour” where they will join Country Music’s “Chief.”

The new DVD brings Blackberry Smoke’s high-energy show to fan’s living rooms with 15 songs and other thrilling features including performances with special guests Zac Brown, Clay Cook of the Zac Brown Band, and Jimmy Hall of Wet Willie, and mini-documentary interviews. And as an added bonus, fans will get a glimpse into the recording of Blackberry Smoke’s highly anticipated new album with footage from the recording at Echo Mountain Studios and much more!

“We were throwing around the idea of filming a show, but we weren’t sure where. As soon as the show at the Georgia Theater was booked, it was a no brainer,” shares Charlie Starr, lead singer of Blackberry Smoke. “We couldn’t be happier with the way everything turned out.”

Fans will have many options for DVD Holiday Bundles on www.blackberrysmoke.com: