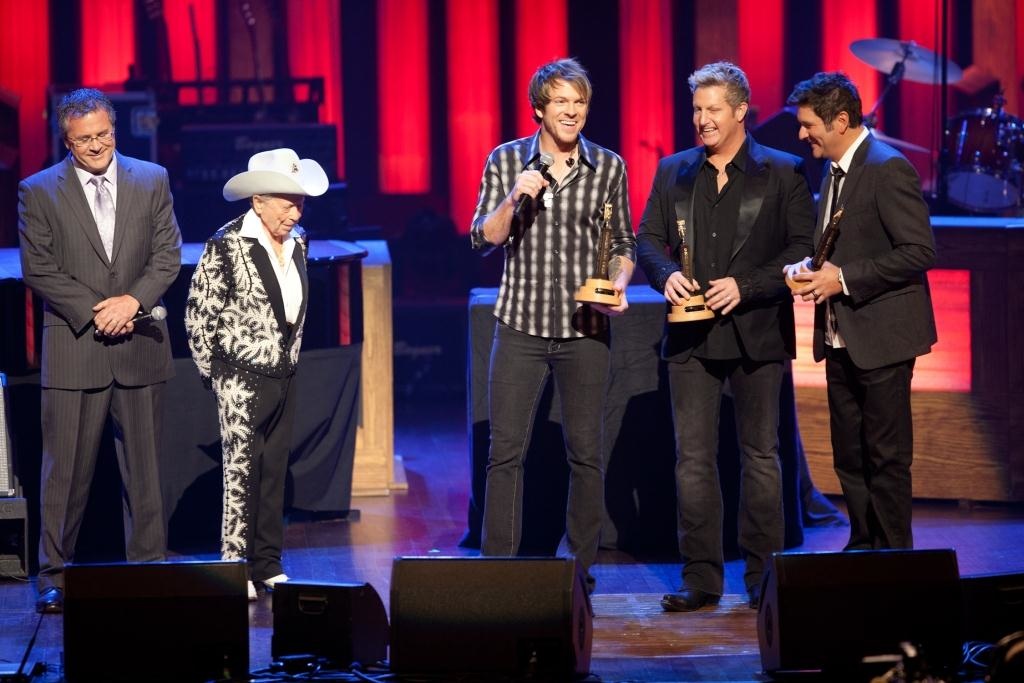 Prior to taking the stage, LeVox said, “it is so humbling to carry the Opry flag.  There’s no higher pinnacle.”

DeMarcus added, “one of the titles we’re most proud of is member of the Grand Ole Opry.”

Rooney, meanwhile, said he began to reflect on Opry membership after a conversation with his dad earlier in the day. “I remember when I was growing up, I would watch the Grand Ole Opry on TV. He remembers when he was growing up listening to it on the radio. Now here we are in the year 2011 watching and listening online. … We are humbled by this and can’t wait to see what the future has in store for us and the Grand Ole Opry. … Tonight is a great platform from which to set sail.”

The group was surprised by a congratulatory video message from President George W. Bush. “We are big fans of Gary, Jay, and Joe Don,” he said, speaking on behalf of himself and former first lady Laura Bush. “We love their music, and we also love their compassion and generosity. Throughout their success, Rascal Flatts have given back to their community and to our country by supporting the Make A Wish Foundation, Vanderbilt Children’s Hospital, and the American Red Cross. I am especially proud of their efforts to honor the men and women of our armed forces, and the heroes who are wounded on the front lines. So thanks for your example of excellence and patriotism. And congratulations as well as a hardy welcome to the Opry.”

“You have witnessed the greatest night of our lives,” LeVox said to the crowd after Dickens had presented the group members with their Opry member awards.