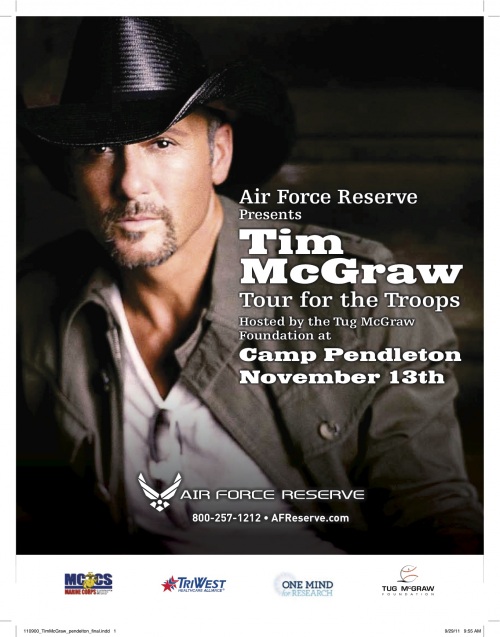 Tim McGraw’s TOUR FOR THE TROOPS concert, courtesy of the Air Force Reserve, will celebrate and honor our servicemen and women with a free concert for members of the military and their families at 6:00 pm PST on Sunday, November 13 at Camp Pendleton. The concert by the GRAMMY® Award-winning musician will headline events including a Family Fun Day beginning at 12:00 pm PST.

“I am proud to perform for the troops and to celebrate our heroes, bringing attention to the need to improve quality of life among men and women who serve our country,” said Tim McGraw, honorary chairman of the Tug McGraw Foundation and the son of legendary baseball pitcher, Tug McGraw, who died from a brain tumor in 2003.

The Tug McGraw Foundation is working in partnership with Air Force Reserve, TriWest Healthcare Alliance and Marine Corps Community Services to educate members of the military and civilians about the increasing number of servicemen and women affected by Post-Traumatic Stress Disorder (PTSD) and the resources available to them. These groups, representing military and civilian interests, are all lending support to enhance awareness of resources such as Marine Corps’ DSTRESS Line, a pilot program for active duty, reserve, veterans and retirees, as well as their families, in the western U.S., Hawaii, and Alaska. Callers to the line will speak with veteran Marines, former corpsmen, and licensed behavioral health counselors who have been specifically trained in Marine Corps culture and ethos. If successful, this pilot will be rolled out Marine Corps-wide in 2011.

“No single agency or organization has the manpower or resources to provide a lifetime of care and support to our military families, but by collaborating with committed partners we can ensure a network of care that these dedicated heroes have earned and deserve. We at TriWest are honored to support this great initiative by Tim McGraw to provide encouragement to Marine families and attention to the great resources we are all providing to support them every day,” said David J. McIntyre, Jr., President and CEO of TriWest Healthcare Alliance.

“It is such an honor for the Air Force Reserve to bring this concert to Camp Pendleton to entertain so many of our servicemen and women and their families who have sacrificed so much for our country,” said Chief Master Sergeant Glen Barnes, Air Force Reserve.

Additional Activities A family fun day will start at 12:00 pm PST on November 13. Families will be able to enjoy local bands, concessions, merchandise and a children’s play area. Families are invited to bring lawn chairs and blankets for the concert at 6:00 pm PST.

Ticket Information Tickets to the concert will be free for military and DOD ID card holders and their dependents. Civilians can purchase general admission tickets beginning October 14 at www.timmcgrawpublic.tickets.musictoday.com. Tim McGraw Fan Club members will have the opportunity to purchase presale tickets at 10:00 am on October 13 at www.mcgrawfan.com or by calling 800-594-TIXX. For more information, please contact mcgrawtourforthetroops.com.