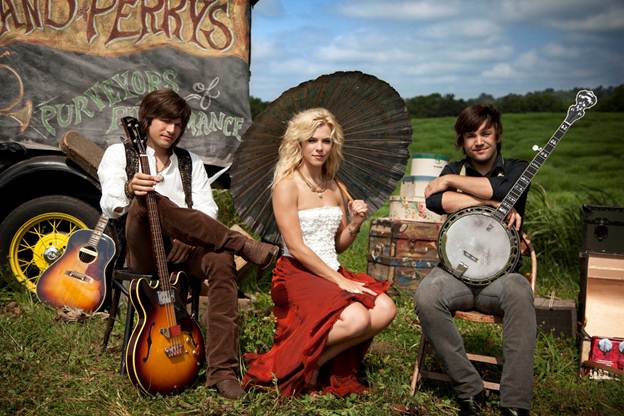 Recently, members of The Band Perry racked up a total of five CMA nominations and now they have new reason to celebrate – their smash single “If I Die Young” has been certified Triple Platinum for sales exceeding 3 million. This milestone arrives as the family band marks the anniversary of their self-titled debut album, THE BAND PERRY, which was released just one year ago this week on Republic Nashville and is now on track to reach Platinum status by the end of the year.

Next up, The Band Perry will perform on ABC’s top-rated Dancing with the Stars the Results Show on Tuesday, October 18 (airing at 9p EST/8p CST) and will soon announce an exciting list of upcoming appearances that will take them through the remainder of 2011, closing it out with a bang.

“Although we’ve planned, prepared and prayed for this moment for the past thirteen years, we’re still a little overwhelmed by the warm welcome we’ve been given,” said Kimberly, Neil and Reid Perry. “Birthdays have always been celebrated big in this family, so to have a one-year-old album AND hear that ‘If I Die Young’ has touched so many people; it makes us feel that we’re sharing our celebration with all of you.”

“It’s hard to believe that all of these incredible accolades have come from The Band Perry’s very first album…but they have!  What an amazing way to celebrate the one year anniversary of their debut release with 5 CMA Award Nominations, a Dancing with the Starsperformance and a certified Triple Platinum single with ‘If I Die Young!'” said Jimmy Harnen, Republic Nashville President.

Over the past year, the sibling trio has won the hearts of millions of music fans in both the U.S. and Canada, where “If I Die Young” was recently certified Platinum. They have toured extensively with icons such as Alan Jackson, Tim McGraw, Keith Urban and are now touring with Reba through the Fall. They have been nominated for, and earned, top honors for their debut album, which combinesmasterful lyrics and traditional Country influences mixed with classic Rock ‘n Roll.

Currently, members of TBP are nominated for five CMA Awards, including Single of the Year, Vocal Group of the Year, Music Video of the Year and New Artist of the Year as well as a nomination for Song of theYear for Kimberly Perry. “The 45th Annual CMA Awards,” airs live from the Bridgestone Arena in Nashville, Wednesday, Nov. 9 (8:00-11:00 PM/ET) on the ABC Television Network.