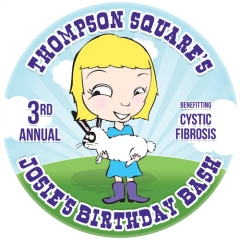 The annual charity concert, created and organized by husband and wife duo Thompson Square, will benefit children living with Cystic Fibrosis. The event will take place at the legendary Wildhorse Saloon on Wednesday, November 16, and will raise funds and awareness for the Cystic Fibrosis Foundation. The concert will take place from 7:30pm-10:00pm.

“The country music community is the greatest,” says Atkins. “When Keifer and Shawna called about this event and explained what a great cause it was for, it was an honor for me to say yes.”

“I’m honored to have the opportunity to jump on board to help those undergoing treatment for cystic fibrosis in honor of Josie,” adds Houser. “I know it’s important to Keifer and Shawna, but even more important to all the children living with cystic fibrosis.”

“We’re so grateful to have great friends like Rodney and Randy,” says Keifer. “We know first- hand how hard it is for the families of children who have cystic fibrosis – not to mention how difficult things are for the children themselves.  We’re happy to be able to give back.  This is a cause that’s truly close to our hearts”

Along with star-studded performances, the evening will also feature a silent auction filled with a collection of notable memorabilia beginning when doors open at 6:00 PM.

Event tickets are currently available at www.wildhorsesaloon.com with general admission starting as low as $17.50 and VIP/meet-n-greet tickets for $100.