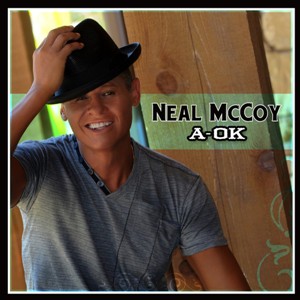 Blaster Records recording artist and multi-platinum singer, Neal McCoy, will release the first single off  his twelfth career album, XII, on Oct. 18th. “A-OK,” coordinated through a recent distribution deal between Blaster Records and Warner Music Nashville, along with Rodeowave Entertainment at the helm of radio promotion, will be launched exclusively for digital download, available at all digital retailers.  Get “A-OK” on iTunes NOW by clicking HERE.

In the 21 years since the ‘consummate live performer’ released his first single, Neal McCoy has had his share of feel good radio records. With over 25 charted singles, five #1 hits, two BMI Song of the Year awards with “Wink” and “The Shake,” and a whole lot of fun along the way, the entertainer has spent the better part of two decades chasing ‘that song.’

With “A-OK,” McCoy’s quest may be complete. “Everybody wants to find that song that hits the sweet spot, which is pretty much them, but everybody else, too. I think I finally found that song!,” McCoy explains.

With its bouncing beat, bright melody, and yes, pure Andy Griffith whistle, along with the Barry Dean/Luke Laird/Brett Eldredge mid-tempo and happy-go-lucky flow, the song about seeing the glass as half-full and the smile upside down in a frown, is the perfect culmination of McCoy’s always effervescent live show and ever energetic image as an entertainer. “I think any song that says ‘It’s gonna be okay, it’s gonna be alright…’ and feels like this one does, has got to be a winner. People really want to hear, and almost need to hear, that right now…Times being the way they are, and something that makes people feel good? Well, anyone who knows me knows I’m all about that,” explains the good timin’ entertainer.

Neal McCoy has sold over 6 million albums. His entrance into the country music world was championed by Hall of Famer Charley Pride, and his return is being orchestrated by CMA Entertainer of the Year nominee and reigning Male Vocalist of the Year Blake Shelton, CMA/ACM Album, Single and Female Vocalist of the Year Miranda Lambert, and longtime guitar great Brent Rowan. McCoy’s highly anticipated and twelfth studio album, XII, is set for a first quarter 2012 release.