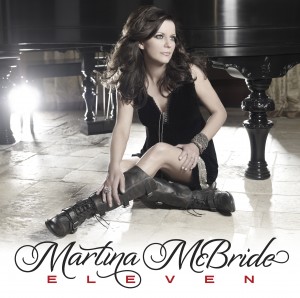 Powerhouse vocalist, Martina McBride, will achieve several “firsts” in association with her upcoming Republic Nashville project, ELEVEN. Due out on October 11, her 11th studio album features 11 new tracks, six of which she penned. Eager to share these with her fans, Martina will embark on a railway tour beginning in Los Angeles and culminating at one of New York City’s most legendary landmarks.

Martina will become the first artist in history to launch an album by taking an Amtrak train across the country and will be the first artist to perform a private concert from atop the Empire State Building. Revered for periodically choosing songs that champion causes, Martina’s latest single, “I’m Gonna Love You Through It,” is a story about a woman undergoing breast cancer portrayed through the eyes of the woman’s husband. The song created a catalyst for many of the release-week ventures.

Martina will launch ELEVEN Across America Powered by Amtrak, boarding a train for a four-day trek to celebrate her album launch and share the new music with her fans from coast to coast. The cross-country tour will visit 11 cities with stops in Los Angeles, CA; Flagstaff, AZ; Albuquerque, NM; Newton, KS; Kansas City, MO; Chicago, IL; Cleveland, OH; Pittsburgh, PA; Washington, D.C.; Philadelphia, PA and New York City, NY. Fans will be treated to a unique concert experience in Albuquerque, Chicago and NYC.

Throughout her journey this October, National Breast Cancer Awareness Month, Martina will ride the Pink Together Express, supported by General Mills. The brand’s Pink Together® campaign is dedicated to raising awareness of, and helping those touched by, breast cancer. They will contribute $1,000 to each of the local Susan G. Komen Affiliates along the tour, for a total of $11,000. Rapid City, SD native – and 2011 Pink Together Survivor Ambassador – Katie Parker will join Martina’s crew, sharing her story and experience at PinkTogether.com.

Upon reaching NYC, Martina will make her final train station performance as part of the unique journey. Next she will conduct a live chat powered by CBS Radio Interactive, promoted and featured across CBS Radio’s Country network (10/13 at 5:11PM ET). Fans can participate in the live chat on any CBS Country radio station portal or at martinamcbride.com.

The excitement will continue as she makes her way over to The Late Show with David Letterman. The October 13 performance will air on CBS at 11:35/10:35pm CST. Early the next morning (10/14), Martina takes the stage at ABC’s Good Morning America to sing “I’m Gonna Love You Through It” before heading over to light the world-famous Empire State Building pink in an effort to raise awareness for breast cancer. The lighting will be followed by an event called MARTINA McBRIDE: LIGHT UP THE SKY in partnership with Stanford Women’s Cancer Center, which includes a VIP-invite reception and a private concert performance, showcased exclusively on Clear Channel Radio’s websites.

Be sure to keep up with Martina by visiting her official website, www.MartinaMcBride.com.