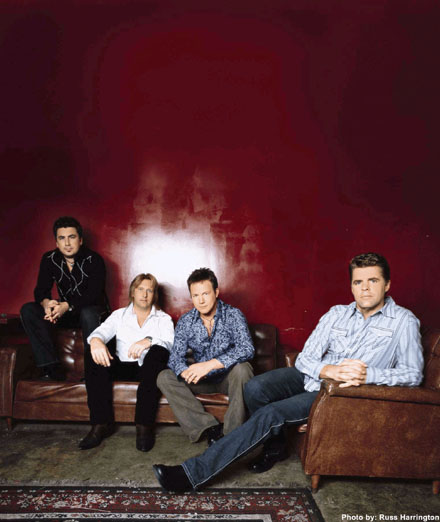 It’s official. Multi-platinum country music group LONESTAR has reunited with original lead singer Richie McDonald and will tour and record a new album in 2012 to mark their 20th anniversary.

The buzz about LONESTAR began yesterday (October 25) when the band sent a Tweet which read: “Big news for Lonestar fans coming tomorrow! 2012 marks our 20th anniversary. What would you like to see and hear from us?”

The Texas-bred band, known for merging their country roots with strong melodies and rich vocals, has amassed RIAA-certified sales in excess of 10 million album units since their national launch in 1995 and achieved 10 #1 country hits including “No News,” “Come Crying To Me” and “Amazed.” The band’s awards include a 1999 ACM Single of The Year for “Amazed” (the song also won the Song of the Year award) and the 2001 CMA Vocal Group of the Year. After McDonald left the band for a solo career in 2007, LONESTAR toured and released their 10th album in 2010, Party Heard Around The World, with lead vocalist Cody Collins. The band wishes Cody the best in his future musical endeavors.

LONESTAR is excited to celebrate their 20th anniversary, open a new chapter and record a new album (label TBA).

Here’s what the band has to say:

Richie McDonald: “Well, five years has come and gone since I left Lonestar. We’ve all tried other avenues and the fact remains that some things were just meant to be. With the Lonestar 20 year reunion approaching, Dean, Michael, Keech and I got together and have decided we have some unfinished business to take care of. I miss those crazy nights running around on stage making music with my band of brothers. Looking forward to a new chapter in the book of Lonestar and reliving some old memories and also making some new ones for the fans that have been loyal to us through thick and thin. See ya soon, God Bless, Richie.”

Dean Sams: “With 2012 in the near future, we all began thinking of what that meant to us as a band. 2012 is a huge landmark for us, marking 20 years of great music and friendship. It was seeing this milestone that began conversations about the legacy of Lonestar. The music we’ve created over the years, along with all of the fans we have made along the way, is something we have never taken for granted. We have so much more music to offer the country music fans, and truly feel they want us back on the radio and out on the road performing live for them. After a lot of soul searching and long conversations between all of us involved, we are energized and excited to be writing and recording new music together again!”

Keech Rainwater: “I think fans ultimately wondered if this was ever going to happen again and it always seemed like the original Lonestar as a whole was better than the sum of its parts. With Richie back in the band, fans can enjoy new music and again experience the sound they are used to hearing at our shows. Lonestar has always been very serious about the music we put out. I am excited to see and hear what comes out of this reunion and upcoming album. I think that having a break for a while, will have sparked new ideas and great music, both live and in the studio. Lonestar music seems to strike a chord with fans from all around. More specifically, ‘Amazed’ and ‘I’m Already There’ seemed to have changed people’s lives in one way or another. The thought of continuing that tradition and moving forward is very exciting.”

Michael Britt: “I’m very proud of everything we’ve achieved in our career so far, doing things that not many bands have been able to do. But even after all that we’ve done, I think we still have a powerful drive to keep making music and doing new things. In this case, doing a new thing is going to be getting back to where we started and hopefully taking Lonestar someplace new while giving our longtime fans and friends the familiar sound they know as Lonestar. I’m excited about the opportunity to celebrate our 20 years together this way and hope there are many more to come.”