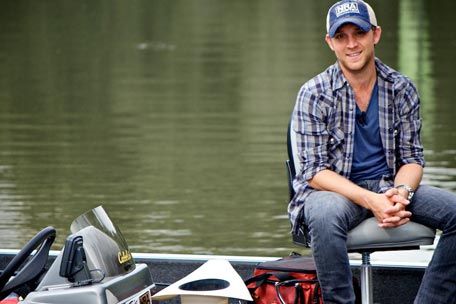 The Valory Music Co. recording artist Justin Moore’s new video for “Bait A Hook” debuted at #1 over the weekend as part of CMT’s BIG NEW MUSIC WEEKEND. Featuring NASCAR driver Carl Edwards, the comedic video was also shown at the Charlotte Motor Speedway during the Bank of America 500 on Saturday (10/15) for more than 100,000 fans at on the world’s largest HDTV.

ESPN was on set at the video shoot to capture some behind-the-scenes footage for a special that ran during NASCAR NOW before the race.

“Bait A Hook”, the second single from Moore’s #1 album OUTLAWS LIKE ME, is a jovial kiss-off song about an ex-girlfriend’s new boyfriend. The new beau, who is somewhat lacking in manliness, can’t even “bait a hook.” Moore’s jealous suspicions about his ex’s new flame turn out to be less than accurate when the two compare the size of their catch.

Moore met his favorite driver, Carl Edwards, for the first time in May after performing at the Brickyard 400 Presented by BigMachineRecords.com. The Country star was invited to watch the race from the Racing Royalty’s pit box, sparking discussion about a cameo.

“Carl’s a great guy and it was a blast having him on set. What a cool experience hanging out on the lake and fishing with my favorite driver. I really appreciated him doing it,” said Moore.

Early last week, Moore was nominated for an American Country Award for Artist of the Year – Breakthrough Artist. Fans can vote from now until November 11 at www.theacas.com. The televised event will air on December 5 on FOX at 8:00PM EST.