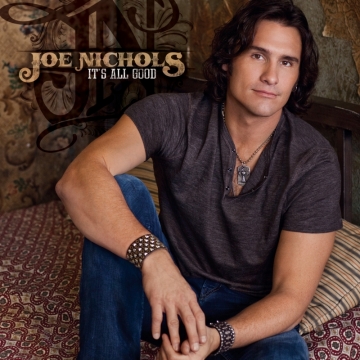 Show Dog-Universal Music will release Joe Nichols’ latest CD, It’s All Good, on November 8th. The 10-song set is Nichols’ sixth studio release and features the lead single, “Take It Off.” The music video for that single has already exceeded 1.3 million views on YouTube, and is sitting in the Top 25 of the Country Singles charts.

It’s All Good is everything country music fans expect of Nichols – pure traditional meets modern sensibilities; music that’s fun and music that’s thoughtful. It is the perfect follow-up to his recent Greatest Hits release, a collection of music that nicely summed up where Nichols has been, musically speaking. It’s All Good takes us on the next phase of his musical journey.

“Yes, this is about commercial success,” he says, “but if you want to make something that lasts, it’s about art too. I want to bring a traditional sound into 2011 and 2012, to keep it faithful and make sure we’re still connecting with today’s listener. On every album, we’re looking for hit singles, but every time out I want to satisfy the artistic part of my soul too.”

Since his debut one-two punch of “The Impossible” and “Brokenheartsville,” Nichols has been touted as the heir apparent to the traditional country music throne, and praised as an artist with integrity and a keen sense of what makes a great song.

It’s All Good was co-produced by Mark Wright and Buddy Cannon.

1. Take It Off
Written by Dallas Davidson, Ashley Gorley and Kelley Lovelace

2. The More I Look
Written by Rodney Clawson, Dallas Davidson and Jim Beavers

4. It’s All Good
Written by Gary Burr and Georgia Middleman

6. I Can’t Take My Eyes Off You
Written by Jon Wolfe, Tim Johnson and James Dean Hicks

7. No Truck, No Boat, No Girl
Written by Adam Wright and Jay Knowles

10. How I Wanna Go
Written by Rivers Rutherford and Tim James