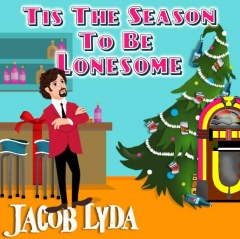 “Tis The Season To Be Lonesome,” written by Jacob Lyda and Jerry Marcum, produced by Grammy-winnner Brent Maher, is a fun, honky-tonk, foot-stompin’ have a country Christmas kinda song with catchy lyrics and a creative Christmas hook. “Got our tree up by the jukebox / A red ribbon ’round the bar / And I’ll watch it snow / Thru a neon glow / And wonder where you are/ I’ll wrap up this bottle / Before ole St. Nick comes/ Whoa tis the season to be lonesome.”

Seemingly destined to sing country music, the Alabama native’s richly textured honky-tonk vocal style stems directly from his background. Influenced by the hardcore country stylists from his youth, artists like Merle Haggard, George Jones, Randy Travis and Keith Whitley, formed the soundtrack that would inspire Lyda’s neo-traditionalist sound today.  Lyda sings country music like a modern master of the genre, and his songs command your attention in the same way that country classics do.