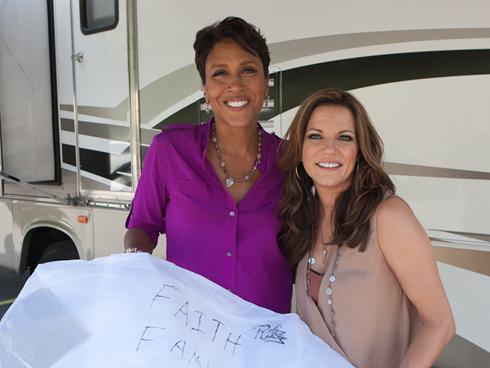 The Grand Ole Opry®, joining Women Rock For The Cure™ in the fight against breast cancer this Sat., Oct. 22 with its third annual “Opry Goes Pink” show, is getting some help from one of America’s favorite morning news program personalities.  ABC’s Good Morning America co-anchor Robin Roberts, herself a breast cancer survivor, will be on hand as a special guest announcer for a portion of the night’s first show, introducing acts as well as the Women Rock For The Cure™ Honorary Survivor of the Year Yolanda Smith. Opry member Martina McBride will take the stage to “flip the switch,” turning the Opry’s signature barn backdrop pink in support of breast cancer awareness. McBride’s current single, “I’m Gonna Love You Through It,” offers hope to those affected by cancer, and the powerful song is included on her Republic Nashville album, Eleven, released Oct. 11.

As of Monday, October 17, $5 from every ticket sold to the night’s second show (9:30 p.m.) will ALSO be donated to Women Rock For The Cure™. That show is scheduled to include performances from Lauren Alaina, Edens Edge, Kellie Pickler, Ronnie Milsap, and more as well as activities recognizing breast cancer survivors and the continuing fight against the disease. Tickets are available at (615) 871-OPRY and opry.com.

“Opry Goes Pink” will extend this year to the Opry’s social media. Fans can follow @opry and @MartinaMcBride on Twitter and share a message about the fight against cancer followed  by #LoveYouThroughIt.  Several of the messages will be selected to appear on the Opry’s barn screen during McBride’s performance. Opry.com is also scheduled to go pink through Oct. 22, and visitors to the site will also be able to visit an online pink auction, with all proceeds benefitting Women Rock For The Cure™.  Among the items to be available include one-of-a-kind Opry experiences and items autographed by artists participating in the “Opry Goes Pink” show.