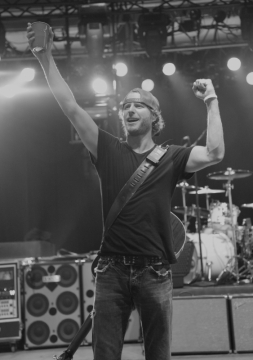 Multi-Platinum singer/songwriter Dierks Bentley announced today that he will take his COUNTRY & COLD CANS Tour into 2012 with international dates kicking off in Vancouver, BC on Feb. 15. Following the Canadian leg of the tour, Bentley will travel Down Under for five headlining shows with Australian country star Lee Kernaghan.

“You can find hard core country music fans all over the world, and I love being able to tour other countries and bond over that music we all love,” said Bentley. “The Fall leg of the Country & Cold Cans Tour has been crazy and really exceeded all my expectations. I’m looking forward to taking it to Canada and Australia in 2012…they do make Labatt and Fosters in a can, right?!”

Of Bentley’s “energized” two sold out COUNTRY & COLD CANS shows in NYC, the New York Times said, “Mr. Bentley was master of the party, the musical equivalent of buying a round for everyone in the bar.”

Bentley’s anthemic “Home” is the new single off his upcoming sixth Capitol Nashville studio project that is scheduled for release in early 2012. Fans can catch the COUNTRY & COLD CANS Tour in the states this weekend in Kent, OH (11/3), Danville, IL (11/4) and Springfield, IL (11/5). For more information and a full list of tour dates, visit www.dierks.com.