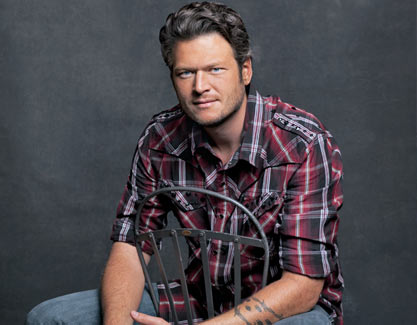 For the first time since “Thriller,” Entertainment Tonight will debut a music video in its entirety in an exclusive world premiere of Blake Shelton’s remake of “Footloose” on Thursday, October 6. Blake Shelton, reigning CMA Male Vocalist of the Year whose current single “God Gave Me You” is his fastest rising to date, sings the iconic classic title song from the upcoming film, which was originally performed by music legend Kenny Loggins.

The Atlantic Records / Warner Music Nashville Footloose Soundtrack for the upcoming Paramount Pictures film is a 12-track album that features music from the film and includes eight new songs along with remakes of four of the classic hits from the original soundtrack. Blake Shelton sings the film’s title song, “Footloose” and Victoria Justice and Hunter Hayes join the album with the movie’s love theme, “Almost Paradise.” The star-studded line-up for the soundtrack also includes new music from Big & Rich, Cee Lo Green, David Banner, Whitney Duncan, Lissie and Zac Brown of Zac Brown Band.  Other classic songs featured on the album are “Holding Out For A Hero” by Ella Mae Bowen and “Let’s Hear It For The Boy” by Jana Kramer.

Writer/Director Craig Brewer (“HUSTLE & FLOW,” “BLACK SNAKE MOAN”) delivers a new take of the beloved 1984 classic film, “FOOTLOOSE.”  Ren MacCormack (played by newcomer Kenny Wormald) is transplanted from Boston to the small southern town of Bomont where he experiences a heavy dose of culture shock.  A few years prior, the community was rocked by a tragic accident that killed five teenagers after a night out and Bomont’s local councilmen and the beloved Reverend Shaw Moore (Dennis Quaid) responded by implementing ordinances that prohibit loud music and dancing.   Not one to bow to the status quo, Ren challenges the ban, revitalizing the town and falling in love with the minister’s troubled daughter Ariel (Julianne Hough) in the process.