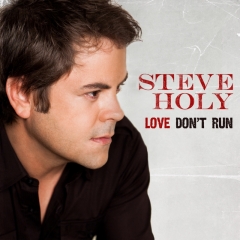 “I’m so proud of this album and grateful it’s finally out,” states Holy. “After the birth of my two daughters this is the third most exciting day of my life!”

“Love Don’t Run combines the best of everything that Holy has given us in the past and turns it up a notch as his voice and delivery of a lyric has matured through the years,” says Today’s Country Magazine. “There really isn’t a bad song in the bunch and this is an album worth adding to your collection. A must have!”

Along with a steady climb up the country charts, “Love Don’t Run” has just reached the #3 spot on GAC’s Top 20 Countdown. Holy continues to tour nationally in promotion of Love Don’t Run.

CountryMusicRocks had a chance to catch up with Steve prior this spring, prior to his album release. Check out our interview and see what he had to say about this new album release, his current hit single and much more by clicking HERE.

Keep up to date with Steve by visiting his official website, www.SteveHoly.com.