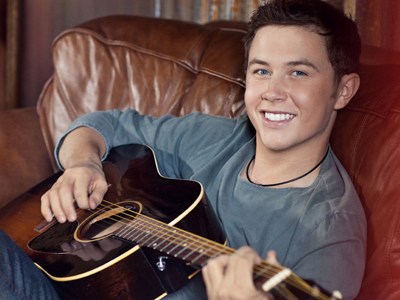 Mercury Nashville/19 Recordings/Interscope artist Scotty McCreery will release his debut album, Clear As Day, on Oct. 4 during a week that will include several national television appearances and a hometown event celebrating his album release and 18thbirthday.

“I am so excited,” Scotty says. “This is something we’ve been working on for months now and the release date is almost here. We are super-stoked and ready for you guys to hear the music.”

GAC will premiere Introducing: Scotty McCreery on Oct. 3 at 9 p.m. ET/8 p.m. CT. GAC cameras have been following Scotty since June and have captured many important moments that have occurred since he won Season 10 of American Idol in May. The show also features interviews with family, friends and industry leaders who have played an important role in his personal and professional life.

Scotty turns 18 on Sunday, Oct. 9, so he is inviting all of his friends and fans to attend his Album Release and Birthday Bash Homecoming. It will be held on Saturday, Oct. 8 at 11 a.m. at the Time Warner Cable Music Pavilion at Walnut Creek in Raleigh.

Scotty will perform with his band during the event and also participate in a Q-and-A with a WQDR radio personality and answer questions from the audience.

Those arriving at the event with a copy of Clear As Day will be admitted to the event free, along with a guest, and copies of the album will be sold at the venue. Also, tickets can be won through local media outlets. All attending the event will receive a commemorative poster.

“It’s going to be a blast,” he says. “It’s going to be held at the venue where I’ve grown up watching country concerts. It will be so cool to get the album out there and sing some songs and have a good time while doing it. It’s my 18th birthday party. What better way to celebrate than at Walnut Creek?”