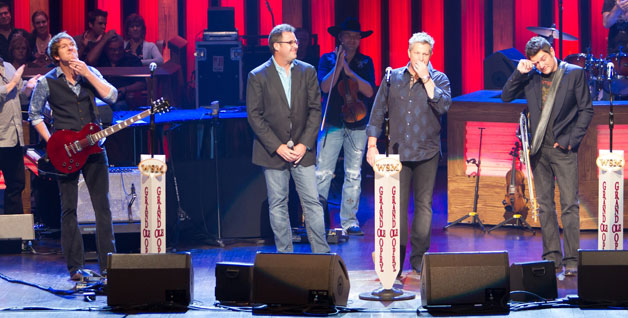 The most awarded country group of the past decade, Rascal Flatts, was invited to join the Grand Ole Opry last night by Opry member Vince Gill.  The vocal group– Gary LeVox, Jay DeMarcus and Joe Don Rooney– will be formally inducted into the Opry family during the Opry’s 86th birthday weekend, Sat., Oct. 8. The show will air live at 8 p.m. Central on GAC: Great American Country.

After the group concluded a performance of the hit “Bless The Broken Road,” Gill surprised them on stage, sharing that the three members of the group owed him $500 from a golf game bet last week. “You would think that after hit record after hit record and millions of records sold, they’d come up with the five hundred bucks, but nooooooo!” Gill laughed.

Taking a more serious tone, Gill continued, “I am here gratefully and gladly to invite you guys to be the next members of the Grand Ole Opry.”

Following a lengthy audience ovation, LeVox said, “You know, we’ve gotten to do a lot of amazing  things in our career like going to Iraq and visiting our soldiers, selling out arenas, and doing a lot of magnificent things that … you can’t even dream that big. But all three of us grew up listening to the Opry: Jay with his grandfather, me with my grandmother, and Joe Don with his entire family. You can’t even put into words what this means to us. When we first signed our record deal in 1999, our main goal was to play the Grand Ole Opry and someday be members of the Grand Ole Opry. Thank you so much for being here.”

“My hero is Vince Gill, and for him to come out here… man, what a surprise!” Rooney said. DeMarcus then invited the Opry member to join the group for a spontaneous collaboration. Within seconds, the group and Gill had launched into Gill’s 1994 hit “Whenever You Come Around.”

Following the show, Opry Vice President and General Manager Pete Fisher said, “Each and every time Rascal Flatts visits us at the Opry, the band generates an absolutely electric response from the audience. While racking up some of the biggest genre-defining hits of the past decade, Gary, Jay, and Joe Don have also demonstrated the high regard they personally hold for the Opry and its members. We’re excited to officially add the group to our member roster next weekend as we celebrate the Opry’s 86th birthday.”

In addition to the supergroup, the Opry’s Birthday Bash Weekend Oct. 7-8 is set to feature Opry performances by Charley Pride, the solo Opry debut of Ronnie Dunn, Craig Morgan, Crystal Bowersox, Ricky Skaggs, and more.  Also on tap for the celebration are a Saturday afternoon birthday concert featuring Opry and Country Music Hall of Fame member Mel Tillis and a free Opry Plaza Birthday Party sponsored by Kodak® throughout the day Saturday.  Fans can make plans for the Birthday Weekend fun by checking out the full weekend schedule at opry.com.