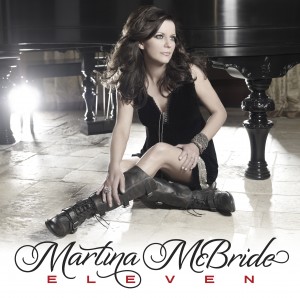 Amtrak will partner with multi-platinum-selling country music superstar Martina McBride to launch “ELEVEN Across America Powered by Amtrak,” a four-day train ride to launch her upcoming Republic Nashville album, ELEVEN. In celebration of her new album, Martina’s tour will include 11 stops, starting in Los Angeles and culminating in New York City in October. Fans will be treated to intimate performances in Albuquerque, Chicago and NYC.

“This partnership is perfect for many reasons,” said David Lim, chief marketing officer, Amtrak. “We both value connections. Martina wants to connect even more closely with her fans — her music touches so many people, and is relatable to so many American’s lives — and Amtrak’s trains connect people across the country every day.”

Both Martina and Amtrak are celebrating meaningful numbers this year. Martina’s new album ELEVEN is Martina’s 11th studio album, and she has been declared the “most played female artist on country radio for the past 11 years” by both Mediabase and Broadcast Data Systems (BDS). This year is Amtrak’s 40th anniversary, which has been celebrated with a national exhibit train tour, special fare promotions, commemorative merchandise and an anniversary-themed website, www.amtrak40th.com , among other initiatives.

“This album is very special to me, and I wanted to be able to share it with my fans far and wide. I also wanted to do something that has never been done before, and I thought what better way to do that than with a cross-country train ride with Amtrak where we make several stops along the way? Eleven stops, to be exact. I’m so excited for this journey across America,” said Martina, who was just declared a 2011 nominee for Female Vocalist of the Year by the Country Music Association.

David Lim added: “Amtrak is a green travel option and a great way to see the country. And Amtrak always provides travelers with a special and enjoyable journey — this tour is a really fun reminder of that.”

The partnership with Martina McBride is another great step in the evolution of Amtrak’s entertainment marketing initiatives-reaching millions of potential travelers and engaging them around their passion points.