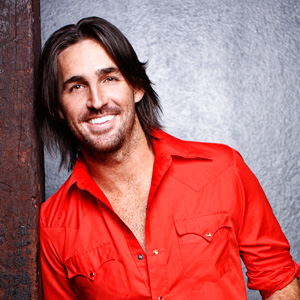 Jake Owen is ready for some donuts! Well, metaphorically speaking, that is…Jake was the guest of honor earlier this week as his record label presented him with plaques commemorating the success of Barefoot Blue Jean Night — the album and the single — with the album debuting at number-one on the Billboard country album sales chart while the single became a two-week chart-topper and his first million-selling digital single, officially certified Platinum this week! Throw in an ongoing tour with Keith Urban, and it’s been an unbelievably exciting time for Jake, who says it’s like being a race car driver for years and finally getting to visit the winner’s circle…and do a few celebratory donuts along the way.

About receiving his awards, Jake remarked, “I had never received a plaque until ’Barefoot’ was certified Gold and that was maybe two months ago. Then, I couldn’t believe it when I got one for ‘Eight Second Ride’ going Gold, which was a song I wrote when I was in college at Florida State. And now, to be standing here with three plaques is just wild. I’m actually speechless. I’m just so grateful to so many people. I’m going to take a photo of these right now and send it to my mom and dad. They aren’t going to believe it.”

Additionally Jake said, “I’ve never had a number-one album — I’ve never had a number-one anything (laughs), to be honest with you. I never have. I never…only to…the last time I remember bein’ number one was growin’ up and either winnin’ our state championship in baseball when I was a kid in Little League or when I won a couple tournaments playin’ golf growin’ up, but there’s not very many times in life where you are the number one, like, you’re the top dog. And as my tour manager has said, for six years now, we’ve been climbin’ in that car every Sunday with all the other drivers, racin’ around the track, every single week, just tryin’ to make it into that winner’s circle. And finally, for the first time, we’re able to pull on in there and do some donuts and celebrate a little bit, metaphorically speaking. And it feels good, man — it feels good to just want to pop the top on some champagne and spray it all over the place like Michael Jordan used to do when they won the championship. Like, there’s a lot of amazing feelings that go through your mind and your heart and your body when you know that what you’ve done is being recognized, and it feels so good to just share that with people. This is a pretty exciting time.”

Barefoot Blue Jean Night is available in stores everywhere.  Be sure to pick up a copy or download on iTunes HERE.

Keep up to date with Jake and see if he is coming to an area near you by visiting his official website, www.JakeOwen.net.