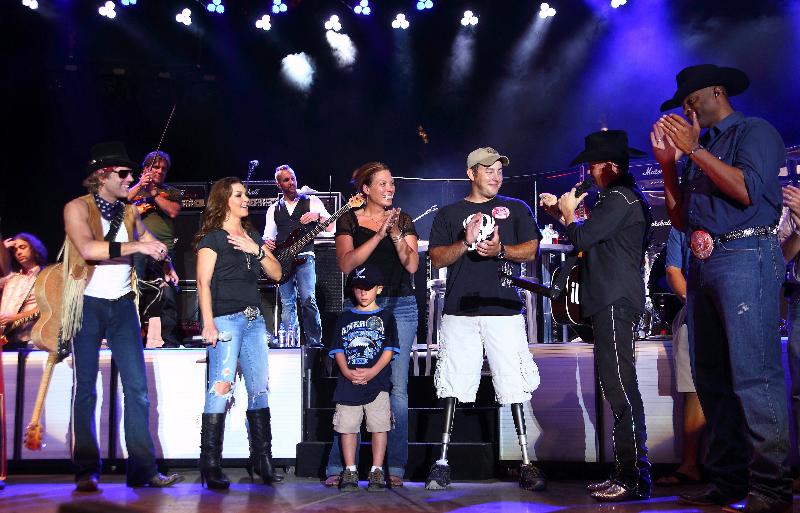 On a beautiful night at The Woods Amphitheater at Fontanel where temperatures approached triple-digits, Xtreme Muzik The Tour co-headliners Gretchen Wilson and Big & Rich raised the mercury even higher not just with their sold-out show of hit after crowd-pleasing hit, but with their hearts as well. Halfway through their thunderous set, which rarely saw either act leave the stage, Gretchen and Big & Rich surprised Air Force veteran Shaun Meadows with a new house from their own proceeds from the evening and Operation FINALLY HOME.

A member of the 22nd Special Tactics Squadron, Meadows lost both legs in July 2008 during a combat reconnaissance patrol in Afghanistan when he was hit by an improvised explosive device. Last year, he became the first active-duty double amputee in Air Force history to successfully perform a personnel drop (skydive).

An Air Force Color Guard entered the stage, as the band played a Jimi Hendrix-style “Star Spangled Banner.” The artists introduced Meadows, his wife and son, and WSMV news anchor Jonathan Martin gave them the big news that a custom-built new home will be constructed in the Nashville area beginning in November. Award-winning builder Goodall Homes has committed to build the home and Nashville-based LP Building Products will serve as lead sponsor, donating materials for the project. The home build can be followed on FinallyHomeTN.com or at Facebook/FinallyHomeTN.

Operation FINALLY HOME, is a 501(c)3 organization that provides custom-made homes to wounded and disabled veterans as well as to widows of the fallen in an effort to get their lives back on track. Run by retired U.S. Air Force Technical Sergeant Daniel Vargas, Operation FINALLY HOME out of New Braunfels, Texas, the program was born out of the Bay Area Builders Association Support Our Troops program.

Prior to the concert, Big Kenny, CMSgt Steph Page and Meadows, along with Team Fastrax Professional Skydiving Team kicked off the evening by skydiving high above the venue and landing in the meadow at Fontanel.

Xtreme Muzik The Tour heads west this week through September, with dates in Nevada, Arizona, Utah, California, Oregon and Washington. The first leg of the tour wraps up in Canada the end of the month, with four dates across British Columbia.