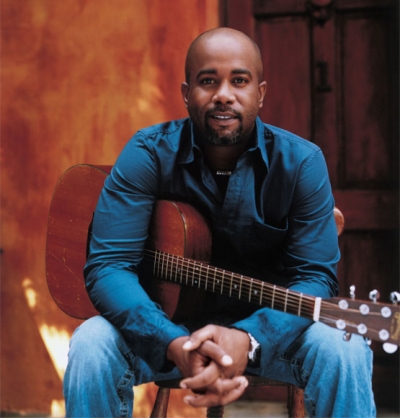 Darius Rucker has rejoined Brad Paisley for the H2O II: Wetter and Wilder Tour, which kicked off last week at London’s famed O2 Arena and will continue through Ireland, Norway, Sweden and Denmark. The entertainers have been receiving rave reviews and having a great time, as noted by The Times (London), Maverick Magazine, and numerous uploaded fan videos showing the pair rocking the stage with Rolling Stones legend and surprise guest Ronnie Wood.

When Rucker returns stateside, he’ll be able to celebrate more than just his first European tour since his days with Hootie, as the singer will be headlining his first U.S. tour beginning this fall. Fans are sure to hear smash hits off both the platinum-selling country debut Learn to Live (2008) and the RIAA-Gold® certified Charleston, SC 1966 (2010), including his five No. 1 singles “Come Back Song” (newly certified Gold), “This” (newly certified Gold), “Alright” (newly certified Platinum), “It Won’t Be Like This For Long” (Gold), “Don’t Think I Don’t Think About It” (Gold) and Rucker’s latest “I Got Nothin’,” which is currently climbing the Top 25. Joining Rucker for select dates will be Rodney Atkins, Frankie Ballard, Thompson Square, and Justin Moore.

“I haven’t headlined a tour since Hootie, so to say I’m excited is an understatement,” says Rucker. “It has been such an incredible experience to tour with Paisley and Rascal Flatts, and I’ve learned a lot being on the road with them. With this tour, I’m just excited to perform again for our fans, and I’m thrilled to have Rodney, Frankie, Justin, and Thompson Square joining us.”

Upcoming tour dates are as follows:

* additional dates to be announced

For a full list of appearances, please visit www.dariusrucker.com.