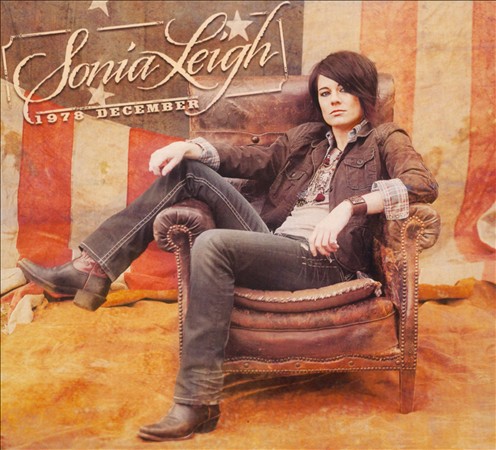 Sonia Leigh has just released her new country album, 1978 December, on Zac Brown’s record label Southern Ground Artists.   1978 December houses 10 solid tracks, all of which Sonia wrote with the exception of two tracks which were co-written with Zac Brown.  While Sonia is no stranger to the music industry, she did impact country music earlier this summer with her hit single “My Name Is Money” and has been on the road with the Zac Brown Band gaining exposure and building her fanbase with each performance.

1978 December serves as a great introduction into Sonia as an artist.   Sonia’s skills as a songwriter speaks volumes and her down-home southern vocals are a treat to listeners with each note she sings.  There are several standout tracks on this album, one of which is “Ain’t Dead Yet”.  The song encourages folks to live in the moment and make your decisions count for something.  Sonia cleverly puts a dose of reality in the song with lyrics such as “money burns fast”, “lawyers lie” and “there’s nothing like a broken heart”.  “Bar” is a great feel-good/drinking country song.  While that may sound like a cliche’ of country music, it is anything but.   The song is one that makes you want to raise your glass & sing along just as Zac Brown does as he accompanies Sonia on this track.  “I Just Might” once again showcases Sonia’s true talents as an artist.  This ballad is full of emotion and soul as she sings about trying to do the right thing and not fall into temptation & make a bad decision.  The six minute song gives listeners a deep look into the passion Sonia has for her music.  “My Name Is Money” served as the introductory single of the album and has been climbing the charts since its release.  While the chorus is simple, the message in the song is strong and brilliant as she illustrates the power of money and how it can chain you down and bring you to your knees while it can also make your eyes light up, and put a dazzle in your smile.

Sonia Leigh’s new album 1978 December solidifies the bright future she has ahead.  In her album title track song, Sonia sings about coming into the world screaming to be heard.  Well, we listened and definitely love what we heard.  Keep your ears tuned & eyes open because you will be hearing and seeing a lot of Sonia not only now but also in the years to come as she is an artist that will be around for a long time.  Sonia is on a successful path and her hard work, determination and talents are more than evident on this album.

1978 December is available in stores now as well as on iTunes by clicking HERE.  This album is a must-have in your collection as you are sure to enjoy it just as much as we did.  Also, be sure to keep requesting Sonia’s single “My Name Is Money” at your favorite country radio station.

Keep up to date with Sonia Leigh and see if she is coming to an area near you by visiting her official website, www.SoniaLeigh.com.