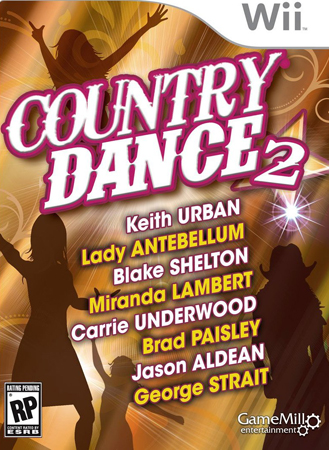 Get on your feet and shake it country-style to America’s hottest country hits! GameMill Entertainment, an independent publisher of entertaining mass-market video games, today announced plans to release Country Dance 2, the sequel to America’s favorite country dance video game that lets you dance and sing along to your favorite songs from country’s biggest artists. Country Dance 2 for Wii is set to hit store shelves this Holiday season.

Country Dance 2 is easy to jump in and play; just pick up the Wii Remote™ and replicate the onscreen dance moves to start earning points with hot country routines. Plus, Country Dance 2 now supports up to four players at once for a whole new level of multiplayer fun including the all new duet dancing option that features unique choreography for each player during the same song. Whether you’re cutting the rug on your own, line dancing side-by-side with your partner, or taking on friends and family in a dancing duel, Country Dance 2 will transform your living room into an energetic dance floor with mega hits from Amercia’s best-selling country artists.

Additional songs and features as well as pricing will be announced at a later date. Country Dance 2 for Wii is rated “RP” for Rating Pending by the ESRB and will be available on store shelves this Holiday season. For more information about Country Dance 2 or the Country Dance franchise, please visit: www.game-mill.com.