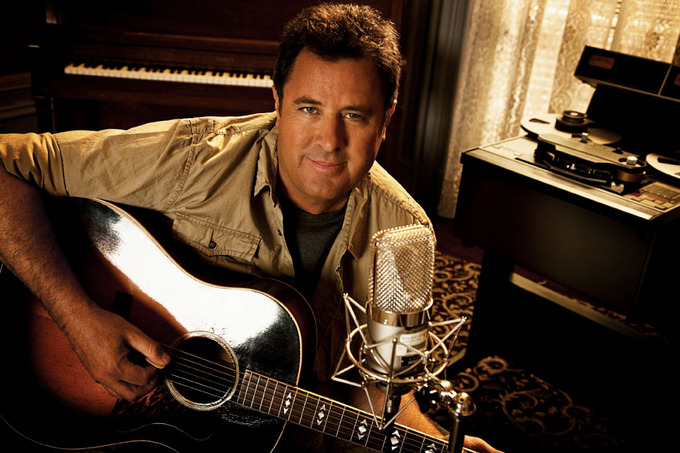 Yesterday marked the release of Vince Gill’s “Threaten Me With Heaven,” a powerful song that is the debut single from Guitar Slinger, which is due Oct. 24 and is his first new album in five years.

Vince wrote or co-wrote every song on the album, including “Threaten Me With Heaven,” which he created with his wife Amy Grant, Dillon O’Brian and Will Owsley, who died last year.

“‘Threaten Me With Heaven’ is a song that I was fortunate to get to be a part of,” he says. “My wife Amy, Dillon O’Brian and Will Owsley were at our home working on that song. I think I had been playing golf or something. I walked into the house and they said, ‘Hey, we’re kind of stuck.’ I’m glad I came home because I got to sit down and help finish a great idea.

“Since I recorded it, my friend Will, who played guitar and sang on it, took his own life, so the song has a really profound impact on me now.  The message of the song and what it is saying, I will probably always think of my guitar-playing buddy.”

Audience members have been moved to tears while hearing Vince perform “Threaten Me With Heaven” for the first time.

“It’s a powerful song and a powerful message,” he says. “I think someone who is struggling will find a lot of good comfort.  It makes people feel better.

“I like to write things about real life, about things that really do happen and matter and mean something. I’m striving to try to record and write songs that reach people. That is what you are always trying to do, to communicate with somebody.  That is why I learned to do this in the first place, because I loved it and I loved the fact that somebody responded to it.”

Music Row’s Robert K. Oermann says, “This gorgeous meditation would be heart melting even acoustic and unadorned. As it happens, the production swells with inspiring choral backing, celestial guitar work and echoey ambiance. If it doesn’t produce a lump in your throat, you are made of stone.”

Vince’s new album, Guitar Slinger, is the follow-up to his critically acclaimed four-CD, 43-song box set, These Days, which was certified platinum, won the 2006 Grammy for Best Country Album and received an overall Grammy Album of the Year nomination.

“This album is just where I am,” he says. “Obviously I write songs different at 54 than I would at 24 or 34. Your life experience is different every time you go there to create something.

“About half of this record has a whole lot more guitar playing in it than I have probably ever done on a record,” he says. “My musicianship is starting to really be the first thing that people are starting to see and think about when they are thinking about me.”

Vince recently played lead guitar on two new songs for Alice Cooper, who told the Toronto Sun, “He’s the Jeff Beck of country. He made my head spin.”

“There are certain songs that are strictly vehicles for me to play guitar, and those kinds of things I really just want a great feel so that I can play a lot,” Vince says. “Then the other half of the songs are great story songs, songs of redemption and even a duet with Amy. There are some really tragic songs on there.”

Gill has sold more than 26 million albums, won 20 Grammys and 18 CMA Awards, including Entertainer of the Year twice. He has been inducted into the Country Music Hall of Fame and the Nashville Songwriters Hall of Fame. He will receive a star on the Hollywood Walk of Fame next year.