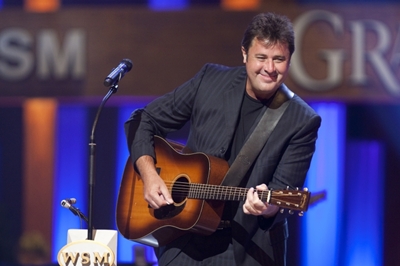 The Grand Ole Opry® presented by Humana®honored one of country music’s most accomplished singers, songwriters and musicians, Vince Gill, on Saturday evening August 13th, on his 20th anniversary as an Opry member. Among those joining Gill on stage throughout the night were his wife Amy Grant, daughter Jenny Gill, Jimmy Dickens, Emmylou Harris, Martina McBride, and The Time Jumpers.

The Country Music Hall of Fame member opened the show before a sold-out crowd by performing “Gotta’ Travel On” in honor of Opry member Billy Grammer, who passed away this week. Gill accompanied himself on Grammer’s 1959 hit on a Grammer Guitar he’d purchased just weeks ago.

Among the show’s many highlights were Gill duets with his former employer and good friend Harris on her hits “Two More Bottles of Wine” and “If I Needed You;” McBride’s interpretation of Gill’s first No. 1 single, “Take Your Memory With You;” and Grant’s “True Love,” with her husband joining her on guitar.

Daughter Jenny performed Gill’s hit “If You Ever Have Forever In Mind” while her dad sat on stage behind her, looking on with pride. Gill shared that more than 20 years earlier he hadn’t been able to accept the Opry’s very first invitation to play the show because it conflicted with accompanying Jenny at her grade school talent show.

Opry Vice President and General Manager Pete Fisher presented Gill with a framed print commemorating his anniversary, after which Gill said, “the friendships I’ve built here mean more to me than every song I’ve ever sung out here on this stage. … I wouldn’t know how to do this [music] without this place.”

Closing the show, Gill said, “in the immortal words of Mr. Roy [Acuff], ‘You better sing the one that brung ya’” before performing the first song he ever sang on the Opry, “When I Call Your Name.”

Holding his 20th anniversary print high, the Opry member smiled, “here’s to the next 20!”