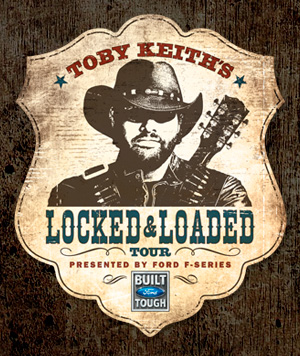 Oklahoma born and bred singer, songwriter and entertainer Toby Keith was made in America, but he’s played in Europe. That’s both “is” played and “has”played, and both will be reprised this fall. Keith’s upcoming album Clancy’s Tavern will be released globally Oct. 25, and five days later he’ll open a 12-date European tour in Edinburgh.

Extending the nine-date, six-city, sold-out 2009 template, Keith will bring his music to even more fans, many of whom will no doubt have picked up his brand new album. Clancy’s Tavern’s title track is an homage to the singer’s grandmother and the super club she ran that served as his earliest education in music and performing. And the honky tonk feel seems to translate just fine overseas.

“The accents are a little different and the food sure isn’t what you get in Oklahoma,” Keith said after the successful 2009 trek. “But they say music’s a universal language and the folks we saw sure seemed to be having a good time. And so did we. I’m already looking forward to the next one.”

Keith and his European fans don’t have long to wait now, and music lovers worldwide will soon have their hands on his new studio album, as well. The debut single “Made In America” is Toby’s fastest rising single in years, already top 10 and climbing.

In other news, Toby has recently been named Forbes’ top-earning country musician, earned rave reviews for his rollicking benefit show at the intimate Bluebird Café, and launched his own signature spirit called Wild Shot Mezcal, all while playing packed venues on his North American Ford F-Series sponsored Locked & Loaded tour.