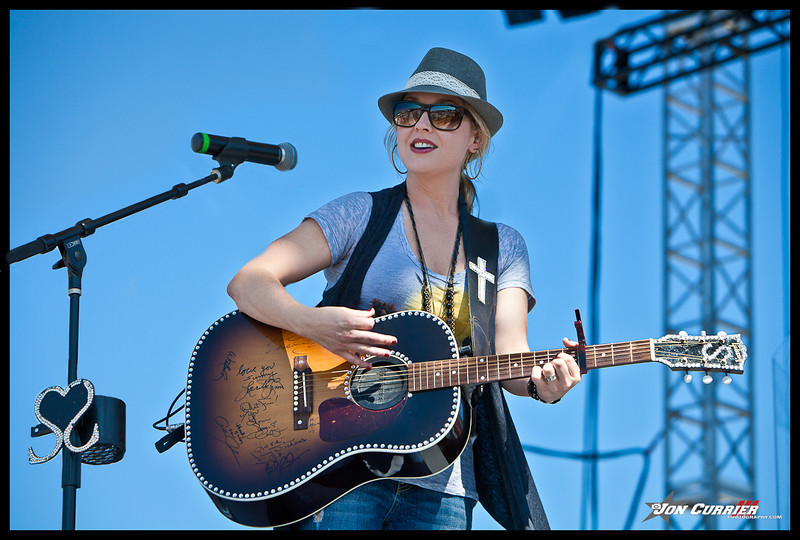 Sunny Sweeney definitely knows how to entertain her fans from just a stage away!  Her performance is entertaining, interactive and completely country through & through.  Sunny has been performing all summer at festivals, fairs and is also a part of Brad Paisley’s H2O II: Wetter & Wilder Tour.  She has even shared the Water World Plaza Stage with Paisley himself.

We got the opportunity to catch Sweeney in action and enjoyed hearing her perform new music from her newly released album CONCRETE with songs such as “Amy”, “Mean As You”, “Drink Myself Single” &  “Worn Out Heart” as well as several others including hit single “From A Table Away” and new single “Staying’s Worse Than Leaving”.  Sunny also included several songs from her debut album Hearbreaker’s Hall of Fame including “East Pines Texas”, “If I Could”  & “Next Big Nothing” (which by the way she has played at the Grand Ole Opry 25 times at this point – so she must be something).  Also part of her set was the Waylon classic “Good Hearted Woman” which everyone enjoyed singing along.  Sunny recorded “Good Hearted Woman” earlier this year with Waylon’s widow Jessie Colter for the Waylon Jenning’s tribute album – ‘The Music Inside: A Collaboration Dedicated to Waylon Jennings, Vol. I’.  Sunny also does a fantastic rendition of “Folsom Prison Blues” which was enjoyed by all as soon as she indicated that it was next on her list to play!

If you haven’t had a chance to check out Sunny Sweeney Live in concert, be sure to add it to your “must-see-in-concert” list!  Sweeney’s tour dates can be found on her official website www.SunnySweeney.com.

Be sure to pick up a copy of her new album CONCRETE available now at retail stores everywhere as well as digitial outlets such as iTunes by clicking HERE.