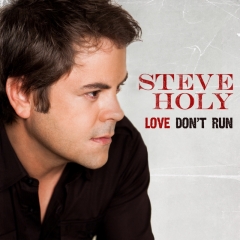 “I’m very proud of where Steve is as an artist,” states producer Lee Miller. “He is singing better on this album than he ever has and he stretches his boundaries this time around. I think there’s a little something for everybody on this project.”

“Love Don’t Run” is currently at #22 on the radio charts making it Steve’s fastest climbing song to date. The video for “Love Don’t Run” was just released last week and is now playing on CMT and GAC.

Keep up to date with Steve by visiting his official website, www.steveholy.com.